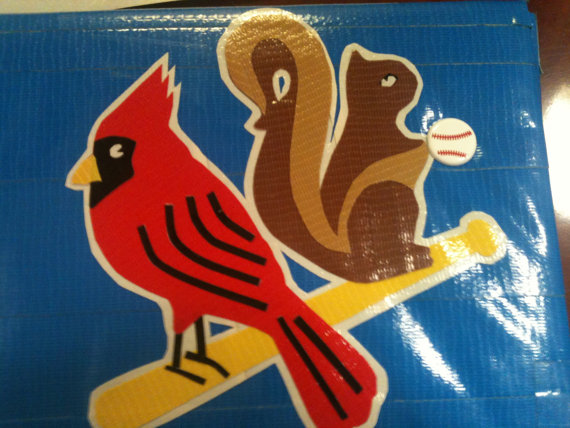 If you’ve seen recent coverage of the 2011 World Series, you might’ve noticed that fans of the St. Louis Cardinals have gone nutty over squirrels. What do Cardinals and squirrels have in common? Or what are they putting in people’s Bud Lights? It all began when a squirrel decided to run across homeplate at Busch Stadium during a post-season game versus the Phillies in early October. That squirrel had the crowd in stitches, so it has since been christened the “rally squirrel” and is now an integral part of the Red Birds’ cheering rituals. In honor of my personal favorite baseball team and that brave little rodent, here is a St. Louis Cardinals Rally Squirrel Duct Tape Clutch that comes in a variety of colors.

The purses measure about a foot wide, 7ish inches tall and about an inch deep. I am making them to order, so if you prefer a smaller or larger style please just message me and I will make the size to your liking. Also, I can put this bird & squirrel design on any color of background. At first I loved the black one and then I fell in love with the blue and red one and now I am thinking that it would look cool really any color (purple, yellow, green, you name it and I’ve probably got it!).
I make my clutches out of recycled cereal boxes, quilters batting, colored duct tape and scrapbooking brads. There is a small 3.5″ by 2.5″ pocket on the inside of the clutch to hold some cash money and a few cards. You would really be surprised with how much you can actually fit in these little suckers. And, I have found that really they only get better with age. The cereal box breaks in causing more flexibility and the tape begins to take on a leather feel to it.

I wish Bob Ross were alive to appreciate the hilarity of the rally squirrel. Even though squirrels get sneaky and steal things, they are so funny and cute that you have to forgive them.

Back to the clutch though. You know you can’t go wrong with duct tape and its incredible strength. If you spill a beer on duct tape, the droplets slide right off. This shiny purse will surely withstand rough crowds at baseball games, as well as damage from everyday abuse.

Plus, duct tape doesn’t just come in silver anymore. The handy material has finagled its way into the fashion industry (predominantly in geekwear). In the past, we’ve featured a Duct Tape Tardis Bag and the iPad 2 Duct Tape Folio Smart Case, and they are perfect examples of how the sky’s really the limit with duct tape.

Order your custom-made STL Cardinals Rally Squirrel Duct Tape Clutch on Etsy.com for $26 US each. Give them out as Christmas gifts for any Cards fans you know. Congratulations to the 2011 World Series Champion St. Louis Cardinals!

Many of us have long known that duct tape can fix almost anything that’s broken, but now this Duct Tape Engineer Book shows you that it can also be used to construct a multitude of things. With a subtitle of “The Book of Big, Bigger, […]

Is there anything that duct tape can’t do? The answer is no. Duct tape can do anything. This A Kid’s Guide to Awesome Duct Tape proves it. This is the perfect book for DIY’ers of all ages. Learn how to make all kinds of cool […]

We’ve known for a long time that duct tape can fix just about anything that’s broken. We also know it is great for building things, with the favorite handcrafted items being duct tape wallets, including these ones with Space Invaders, Pac-man, and Tetris video game […]

The best way to make squirrels pay for all the havoc they wreak is to make them dress up for different occasions. When you have a set of Dress-Up Squirrel Magnets, you get to have a little harmless revenge on them. Forget Kung Fu Panda, […]