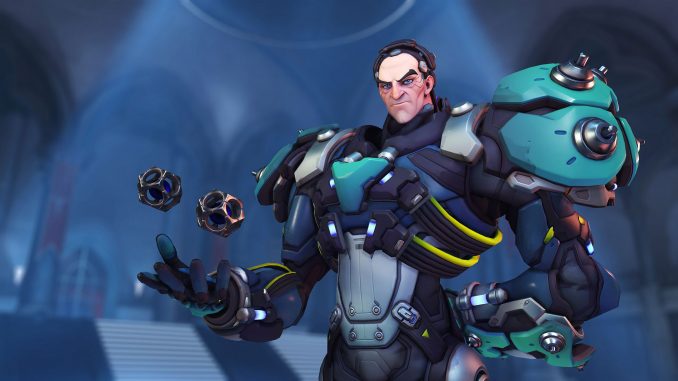 There’s a new tank hero coming to Overwatch, that you can learn about in this New Overwatch Hero Sigma Origin Story Video.

Sigma is a tank, with the unique ability to control gravity. His abilities are:

Sigma launches two gravitic charges, which bounce off walls and implode after a short duration, damaging enemies within a sizable radius.

Sigma propels a floating barrier to a location of his choosing. He can dismiss the barrier at any time.

Sigma freezes incoming projectiles in midair, converting them into shields.

Sigma gathers a mass of debris and flings it at an enemy to knock them down.

Unleashing his full powers, Sigma takes flight, lifts enemies in a targeted area, and launches them into the sky before slamming them back down.

Peek inside the mind of an eccentric astrophysicist who hopes to unlock the secrets of the universe, unaware he’s been turning into a living weapon: Introducing Sigma.

Sigma is an eccentric astrophysicist and volatile tank who gained the power to control gravity in an orbital experiment gone wrong. Manipulated by Talon and deployed as a living weapon, Sigma’s presence on the battlefield cannot be ignored.

At BlizzCon2018, Blizzard Entertainment introduced a New Overwatch Hero: Ashe complete with both Intro & Origin Story Videos. Both of these videos are included below in this article. In summary, Ashe is a damage hero with a semi-automatic rifle, double-barrel shotgun, dynamite, and a massive […]

Blizzard just released the Overwatch Animated Short D.Va Origin Story in a new video called “Shooting Star.” It tells the story of how D.Va (aka Hana Song) saves the city of Busan, South Korea from an omnic attack. She uses some quick thinking and inspiration […]

We saw the Baptiste Origin Story Video a few weeks ago, and now the New Overwatch Hero Baptiste has been released. Just fire up Overwatch and install the March 19, 2019 update (Patch 1.34.0.1) to play with the new hero. Everyone will want to play […]