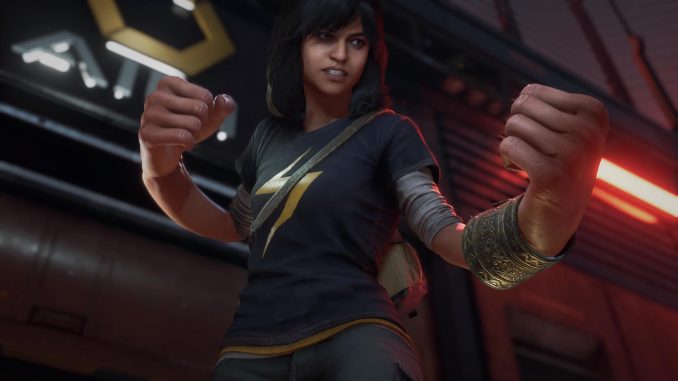 This new Marvel’s Avengers Kamala Khan NYCC Announcement Trailer was released today at the New York Comic Con. Check it out to get to know a bit more about the plot of the upcoming Marvel’s Avengers video game and to see Ms. Marvel Kamala Khan, one of the playable superhero characters.

Marvel’s Avengers is scheduled for release on May 15, 2020, for the Microsoft Windows, Google Stadia, PlayStation 4, and Xbox One. It is being developed by Crystal Dynamics and Eidos Montréal and will be published by Square Enix.

A self-avowed Avengers fan, in the game’s original story, Kamala Khan must apply her intellect, optimism, and unique abilities to the task of unravelling a global conspiracy.

The Captain is out and the Ms. is in with the Ms. Marvel Kamala Silhouette Womens T-Shirt. When Carol Danvers upped her game and became Captain Marvel, her old moniker just sat around and collected dust, but only for a little while because Kamala Khan […]

If you watched the Avengers movies and wished you could be right there, fighting alongside Captain America, Iron Man, Black Widow, and Thor, you’ll want to see the Marvel’s Avengers: A-Day Official E3 Trailer. Scratch that—imagine being the Hulk and smashing everything and even picking […]

New York Comic-Con is on and Hulu took the opportunity to release the Marvel’s Runaways Season 3 NYCC 2019 Trailer. The new season, which consists of 10 episodes, will arrive on Hulu on December 13, 2019. Runaways’ cast includes Lyrica Okano, Rhenzy Feliz, Kevin Weisman, […]