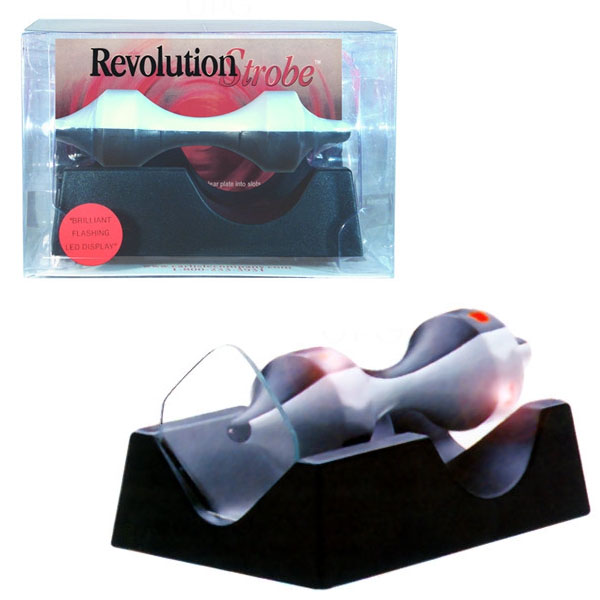 Sometimes adults need toys to play with to keep our hands and minds busy, and toys are great for the occasional boost of inspiration, too. Buckyballs, Buckycubes, Magnetic Thinking Putty and Magformers are excellent toys that use the strength of magnets to allow us to create unlimited numbers of crazy structures and abstract formations. Here’s another toy that uses magnets, but also LED lights. The Magnetic Levitator Strobe will keep you entertained and mesmerized for hours.

The Magnetic Levitator Strobe is an anti-gravity spinning device that appears to be floating in air. The strobe design flashes bright red LEDs to create intriguing light patterns around the spinning, levitating spindle. Give the spindle a good smooth spin and it can rotate for several minutes. The Magnetic Levitator Strobe is a kinetic motion toy that is great fun for any desk or office. Base – 5″ wide x 2.5″ high x 3″ diameter, black, hard plastic with glass plate. Spindle – all black with LEDs. Instructions included with packaging, batteries included (only required for LEDs, not required for spinning.)

Not only will you be amazed that the object is spinning in mid-air but you’ll also marvel over the light patterns that form as it spins. Swirly! It’s time to disco at your desk. Hopefully the flashes of light won’t cause anyone to get seizures.

Geeks just love things that levitate; UFOs, globes, people in magic shows. It’s probably because anything levitating on its own looks so abnormal and magic, when really it’s just a clever manipulation of different forces being put to use.

The incredible Magnetic Levitator Strobe is $13.99 at Office Playground.

If you ever wondered how Cobb, Leonardo diCaprio’s character in the Oscar-winning movie Inception, was able to make that top spin round and round until forever, then you might want to listen in on this little secret. To spin that top like he did, just […]

Magnets alone are fun to play with, but toy makers have been pretty creative in coming up with novelty toys like the Tegu Discovery Magnet Set, Magnetic Thinking Putty and the Magnetic Spinning Top, just to name a few. Buckyballs are another type of magnetic toy that can provide hours […]

The Unicorn Lover – Magnetic Poetry set contains over 200 magnets with random unicorn related words printed on them. Prepositions, verbs, nouns, pronouns, suffixes–you’ll find all of these and more in this set. Aside from its novelty value, you can also actually put these magnets […]

When I was in college, my friends and I used to play improvised shuffleboard all the time: we’d draw the board on a piece of paper and use pens and some coins to simulate the real game. It would’ve been a whole lot easier if […]

So the Lolcat Poetreez – Magnetic Poetry set doesn’t really have a lot to do with cats, although they’re featured prominently on the box. So what it is? Well, it’s basically a set of 200 magnets with random words on them spelled out in chat-speak. […]