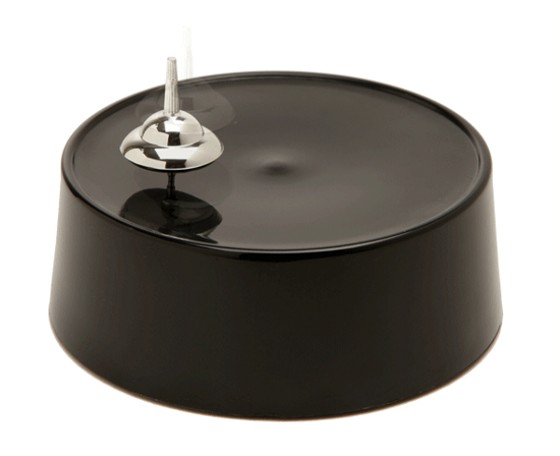 If you ever wondered how Cobb, Leonardo diCaprio’s character in the Oscar-winning movie Inception, was able to make that top spin round and round until forever, then you might want to listen in on this little secret. To spin that top like he did, just give the Magnetic Powered Spinning Top a whirl.

It is, of course, physically impossible to spin a top endlessly with the use of an ordinary top. But with this top, you could have it spinning up to a week (or until the battery runs out, that is.)

Science-wise, it’s actually pretty cool what’s going on with the Magnet Powered Spinning Top. See, you get a spinning top with a radially oriented magnetic field and an associated base that houses a conductive coil. When the top spins past the center of the base, its changing magnetic field induces a current in the coil which momentarily opens the switch to the battery resulting in powering up the electromagnet. The electromagnet then delivers enough torque to the spinning top to allow it to speed up and spin away from the center. And because the electromagnet isn’t always on, your Magnet Powered Spinning Top can spin for about a week – sometimes more!

Get your fill of science fun and movie magic with the Magnetic Powered Spinning Top, available from ThinkGeek for $9.99 and watch the video to see it in action.

Sometimes adults need toys to play with to keep our hands and minds busy, and toys are great for the occasional boost of inspiration, too. Buckyballs, Buckycubes, Magnetic Thinking Putty and Magformers are excellent toys that use the strength of magnets to allow us to create unlimited numbers of crazy structures and abstract […]

There’s something soothing about giving a quarter a spin and watching it twirl around the table, but the moment never seems to last long enough. If you find a spinning disk as relaxing as I do but don’t want to strain your wrist by giving […]

Want to see Jupiter up close and personal? No problem. The Jupiter Solar Spinning Globe will bring the gas giant to life in your room. This globe measures 4 1/2″ in diameter and even rotates. The rotation is powered by low-light solar cells. It is […]

Get closer to the red planet than ever before with this Mars Spinning Globe on your desk. This fun globe measures 4 1/2″ in diameter and makes space exploration easy. The rotation is powered by low-light solar cells. You will find it mesmerizing. Who needs […]

This Moon Spinning Globe lets you take a trip to the moon without leaving your home. This globe measures 4 1/2″ in diameter. The rotation is powered by low-light solar cells. You don’t need to be an astronaut to go to the moon now. It […]