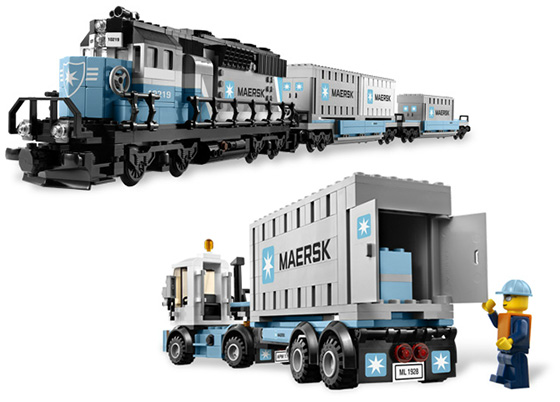 One of the brand new Lego Shop exclusives is the Maersk Train Lego Set. Most geeks think Lego sets are cool and many of us like trains too, so an awesome Lego train set is practically a dream come true. This highly detailed diesel-electric freight train Lego set features authentic Maersk branding, an engine (complete with an elaborate 16-cylinder engine hidden under a removable side panel) with opening driver’s cab, 3 containers with opening doors, 2 wagons, a shunter truck, and detachable trailer.

While it isn’t motorized out of the box, this Maersk Train Lego Set is designed to easily be motorized by adding Lego Power Functions.

A replica of the real engine that operated on the railroads of America, this Maersk train features exceptional detailing and functions, such as opening driver’s cab, removable side panel revealing a detailed, 16-cylinder engine, and authentic Maersk branding. The model also includes 2 wagons and 3 containers with opening doors (1 with refrigeration detailing). The set also includes a shunter truck and detachable trailer for loading and offloading the containers. Add LEGO Power Functions to motorize! 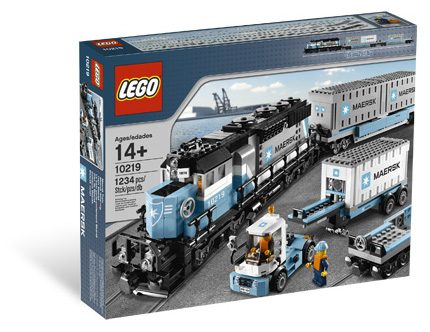 Order the Maersk Train Set for $119.99 exclusively at Lego Shop.

LEGO and Maersk fans probably remember the cool Maersk Train Lego Set from a few years ago; now LEGO and Maersk have teamed up again to bring you the LEGO 10241 Maersk Line Triple-E Container Vessel. This 1,518 piece LEGO set is based on the […]