Life in the fast lane is exactly what bullet trains are all about. One of the Shinkansen trains clocked a head-spinning top speed of 581 km/h during a test run. But if you’d rather focus on improving the speed at which you shovel food into your mouth rather than how fast you can get from A to B, maybe it’s time you try the lightning-fast Hashi Tetsu Japanese Bullet Train Chopsticks.

The chopstick handles are the spitting image of real-life Shinkansen front noses. A lot of attention to detail went into designing these utensils, since they were given the official green light from Japan Rail. The tapered ends of the chopsticks help you accurately grip your sushi, udon or gyoza faster than Mr. Miyagi could catch a fly. 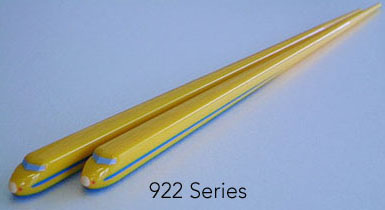 And just like the Samurai Sword Chopsticks we showed you a while back, there are several options of bullet train chopsticks to choose from as well. You’ve got the N700 and N700 Sakura whose noses have an elongated slope, and then there’s the O Series and 922 that have rounder button noses. All chopsticks share the same beautiful blue streak along the sides that disappear towards the ends to create the illusion of speed.

Although a notebook computer is supposed to be portable, it really is not practical to actually use them on your lap or in bed unless you have a solution like the Logitech Speaker Lapdesk N700. This laptop stand not only makes your laptop comfortable to […]

In ninja school our master taught us to always be prepared, which is why we had to learn hot to kill a man with nothing more than a rice bowl. Kids these days have it so much easier, because someone invented Nunchops Nunchuck Chopsticks. With […]

Eating with chopsticks has never been easy; maybe using the Force will help. These Star Wars Lightsaber Chopstick Sets are sure to liven up a boring night of Chinese food. Get the friends together and have a little food fight Star Wars style!

The moment I saw these drumsticks chopsticks, Michael Jackson’s hit song “Beat It” immediately began playing in my head. And that’s exactly what you can do with the aptly named Beat It! Drumstick Chopsticks. We don’t mean beat it in the figurative sense of course; […]

We all marveled at the spork when it first came to fruition and changed our lives forever. Was it at KFC while eating cole slaw then mashed potatoes to wash down some fried chicken? Who knows?! But try using the spork for eating noodle dishes at the […]