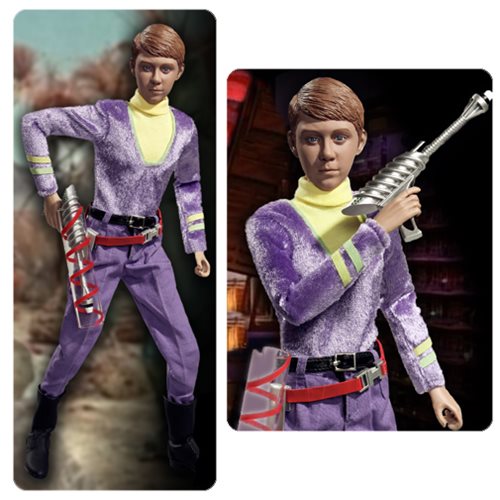 Get lost in 1965 with the Lost In Space Will Robinson 3rd Season Outfit 1:6 Scale Action Figure.

Blast into the past, to a time when the Robinson family became lost in space, thanks to the nefarious Dr. Smith.

Based on Billy Mumy’s character during the third, and final, season of the cult classic television show, this 1:6 scale figure features Will Robinson wearing his purple tunic, purple pants, yellow shirt, silver boots, and black belt. A retro futuristic holster holds a laser pistol, which can come in handy when Dr. Smith tries yet another one of his crazy schemes.

The Lost In Space Will Robinson 3rd Season Outfit 1:6 Scale Action Figure will be available January 2017 but it can be pre-ordered now for $178.99 at Entertainment Earth.

Looking for that perfect Fathers Day gift, or just tired of having a cold wet hand as you peruse the party scene.  Look no further, the Beer Holster is funny and practical.  Think about it; who hasn’t wished they had something to hold their beer […]

When a Single Beer Holster, Six Pack Beer Belt and Wine Rack Flask-Bra won’t do, try on the 12 Pack Beer Can Holster…It can hold 12 standard sized cans, so it doesn’t have to be beer…but, come on! Carry your twelve-pack like proud papa displaying […]

Now listen to me. The Doctor Who 3rd Doctor Figure is available to add a little dapper dignity to your Whovian collection. Cast in a specially formulated metallic resin and painted by hand, the Third Doctor stands with his sonic screwdriver held before him, ready […]