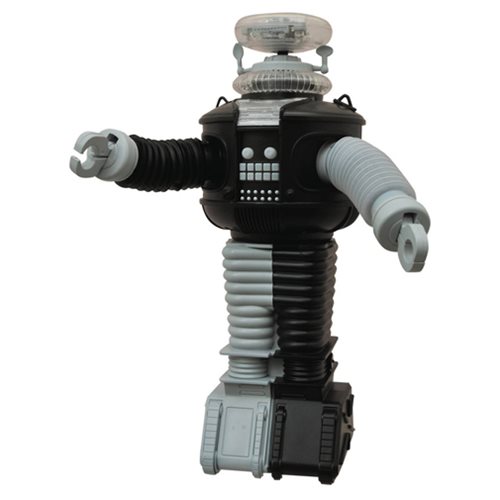 The Lost In Space B-9 Robot Antimatter Version Electronic Action Figure is a 10-inch version of B-9, the robot from Lost in Space, transported into another dimension!

This Anti-Matter version features a fresh paint job, as seen in the episode “The Anti-Matter Man,”. It also has lights and sounds from the classic sci-fi TV show. Lights on his head and chest blink constantly while B-9 is on, and additional lights and “anti-matter” dialogue are triggered with the push of a button.

Quotes include, “This is the opposite world,” “So you’re the goody-goody one,” and I” don’t need help from you, punk – get lost!” You can also manually raise and lower his head, open and close his claws, extend his arms and turn his torso to the left and right. He even has wheels so you can roll him around! This is pretty much the ultimate B-9. He is only $39.99 from Entertainment Earth. You can pre-order him now for October.