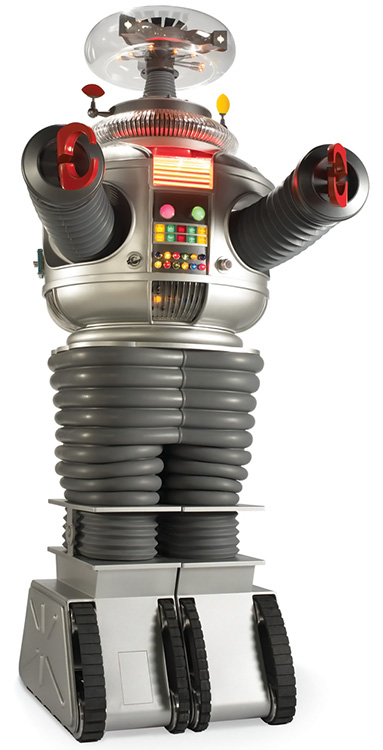 Danger Will Robinson! Standing 6 1/2 feet tall and weighing 275 pounds, this life-sized Lost In Space B-9 Robot is a remarkably detailed model robot. Reproduced using original archival blueprints, patterns, and molds from the classic 1960’s TV series Lost in Space, this is a completely detailed and accurate replica of the B-9 Environmental Control Robot. It has many features that make it uber-cool, such as remote control, animatronics such as a soil sampler probe, flashing lights, and the ability to speak over 500 pre-recorded phrases through a 240 watt audio system.

This Genuine Lost In Space B-9 Robot is made from fiberglass, acrylic, aluminum, and steel parts, including its rotating torso and radar head, flashing lights, animated ear sensors, and clawed arms. It can be operated using the included remote control, allowing you to move its torso left and right and activate the robots soil sampler (which comes out of its right tread housing and spins; the robot provides an audible environmental analysis thereafter). The robot has a 240-watt audio system, and speaks 511 pre-recorded phrases performed by Richard Tufeld, the original voice of the robot from the television series (including such familiar phrases as “Danger Will Robinson!”) Pulling the robot’s power pack causes it to utter “Aaghhhhhh…” just as it did in the TV series when being shut-down; plugging it back in prompts it to say “Who turned out the lights?”

If you have a ton of money burning a hole in your pocket, place your order for the Genuine Lost In Space B-9 Robot for $24,500 at Hammacher Schlemmer.