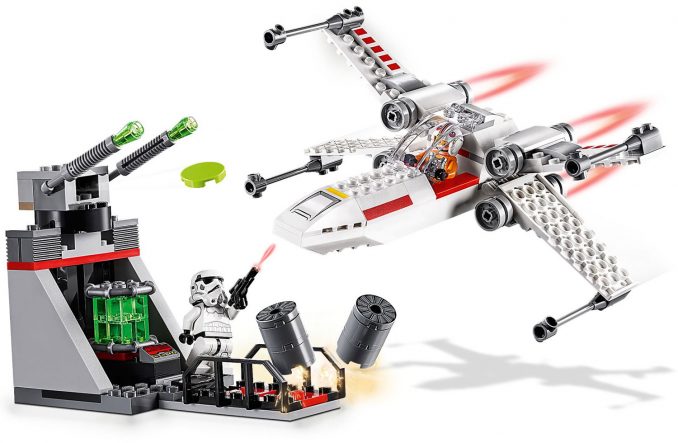 There’ve been plenty of LEGO X-Wing sets before, but this LEGO Star Wars X-Wing Starfighter Trench Run #75235 is an awesome little set for reenacting the famous trench run from the Battle of Yavin at the end of Star Wars: A New Hope.

With just 132 pieces, this set is easy for younger kids to put together, and has a 4+ age rating. The buildable X-Wing features an opening minifigure cockpit, where you can place the included Luke Skywalker (in rebel flight suit) minifigure. It also comes with a Stormtrooper minifigure and an R2-D2 droid figure.

Let your child play out unforgettable LEGO® Star Wars™ space adventures with the set #75235 X-Wing Starfighter Trench Run collectible building toy. This LEGO 4+ set is designed to be fun and easy for youngsters, with folding wings and an opening minifigure cockpit, plus a special Starter Brick base that lets even first-time builders experience the pride of constructing buildings, vehicles and more, all on their own. The included simple guide to build and play will also help your young Rebel warrior understand the purpose of the building steps and grow their imagination and confidence for the perfect start to LEGO brick building in a familiar Star Wars setting. This simple LEGO set also includes a rotating turret for endless action play as well as Luke Skywalker and Stormtrooper minifigures, plus an R2-D2 Star Wars LEGO droid figure.

Portal (and Portal 2) are huge hit video games, but they haven’t had a lot of related merchandise, especially compared to Angry Birds. Fortunately, it seems like that is starting to change with cool products like the Portal 2 Plush Portal Turret with Sound. It […]