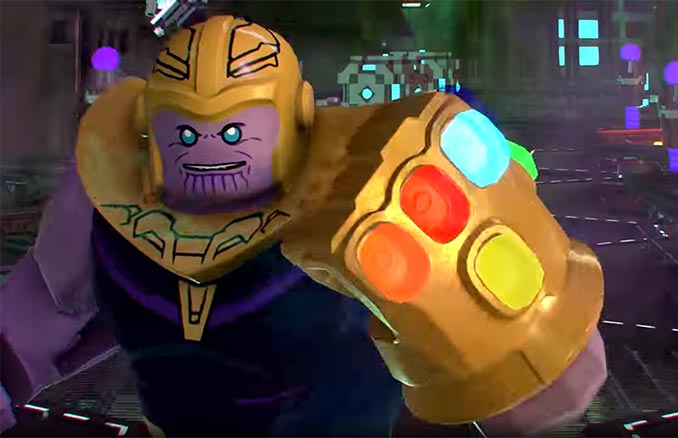 Now’s your chance to become the “Mad Titan” aka Thanos in the Marvel’s Avengers: Infinity War DLC! In true villainous fashion, Thanos and the Black Order arrive at Attilan to cause trouble. Up to the challenge?

This action-packed level offers players the chance to control Thanos, one of the most dangerous Super Villains in the Marvel Universe, and his ruthless army. The Mad Titan and the Children of Thanos have invaded Attilan to take on Black Bolt and the Inhumans. Working as a team, the menacing crew must work their way through the various levels of Attilan before they are given the opportunity to break through to Black Bolt’s throne. New unlockable characters include Thanos, Ebony Maw, Proxima Midnight and Corvus Glaive as well as a new teenage Groot and the massive Hulkbuster Mark 2.

LEGO Marvel Super Heroes 2 is an epic adventure and sequel to the smash hit, LEGO Marvel Super Heroes. This original branching storyline, co-written by comic book veteran Kurt Busiek, transports players into a cosmic battle across a myriad of Marvel locations ripped from time and space into the incredible open hub world of Chronopolis. Packed with signature LEGO humor for fans of all ages, gamers will go head-to-head with the time-traveling Kang the Conqueror through Ancient Egypt, The Old West, Sakaar, New York City in 2099 and many other Marvel settings.