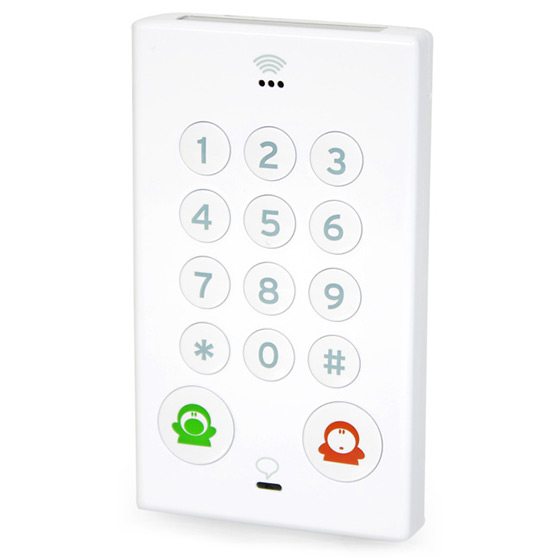 Most mobile phones nowadays are all crammed with so many extra features and functions. They may even put the MP3 players and cameras out of business in a couple of years. But for people who want to use their mobile phones just for calling, then they’d better get John’s Phone—the world’s simplest and easiest cell phone.

It’s a little strange to name a mobile phone after a person but it’s as anonymous and basic as a John Doe. It comes in three classic colors: white, black, and gold if you feel like being fancy. This phone has been stripped right down to the very basics that it doesn’t even have a screen; just a keypad and two buttons to make and end your calls. Simple, quick, and easy, even for grandma.

In this modern age of oojamaflippery, John’s Phone is a refreshing bit of simplicity. It’s a phone that, well, is a phone. Nothing else. It’s as simple as that – it can ring people, and people can ring it.

It comes with a paper address book and pen to keep all those numbers to hand, and no risk of accidentally sending that text to ‘Gran’ instead of Fran. With great simplicity comes great power, because, as John’s Phone isn’t wasting it’s battery on throwing birds at pigs, looking at pictures from last night or annoying the rest of the bus with those tinny ringtones, it has a talk time of 6 hours, and three weeks of standby time.

Yet another wristwatch with a built-in mobile phone and lots of other stuff. Much like the cell phone watch we covered some week ago, but with a slightly larger screen, a couple of games, and some other bonus features.

Who who would’ve thought that we would see those old brick-like mobile phones again some 20 years later? Well, they’re – in a mini version.

You could be bending down to pick something up off the ground and have your mobile phone just shoot out of your breast pocket and into a puddle of water. You could be in the comfort room doing your thing when your iPod just slides […]

The flexible adapter on this 7×18 mobile phone telescope allows you to mount it onto just about any phone or PDA. This will take your “phonagraphy” experience to new heights, giving you the option to take high quality photographs easily. Here’s a video demonstration of […]

We covered a candy bar Hello Kitty Mobile Phone last month and now DreamKitty.com has announced a slider version that is available in the U.S.

Say hello to the future past of mobile phones. While Æsir’s Mobile Phone looks absolutely futuristic and classical at the same time (yes, I think that’s possible), it’s functions are somehow more like a thing of the past. Phone companies are releasing smartphone after smartphone equipped […]