It pays to go the extra mile when it comes to security. However, if you can’t afford to install some sort of surveillance system at your home or apartment just yet, then you might want to consider getting one of these Dummy Security Cameras instead.

While it’s just what its name implies, a dummy; thieves, robbers, and other no-gooders won’t know that. Plus the red LED light on the Dummy Security Camera blinks periodically, so that definitely adds a bit to its authenticity. 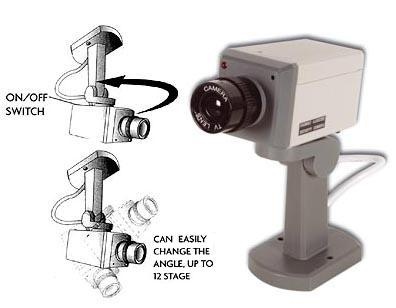 If you need a security camera but can’t quite afford it, one of this dummy security cameras will do the trick. And it’ll give you the same results a real camera would: driving away thieves who’ll run off in a fright.

This dummy security camera not only looks real, when it detects movement it also moves from side to side. It even has a red indicator light that goes on to indicate the camera’s working.

The Dummy Security Camera is available from Curiosite for $14.09.

There are a lot of petty thieves around nowadays. Just the other week, a friend of mine who recently got married told me about this guy who came out of nowhere and just snatched his wife’s bag right off her bike handles. Talk about scary. […]

Say hello to the latest addition to the long and constantly growing line of creative spy gadgets: A camcorder hidden inside a dummy Bluetooth headset.

We’ve all heard the stories, “You should have seen what I did today, “I tore it up on the half pipe, “The street course was killer, ” I rode the gnarliest single track ever”, you know how it goes.  And most of us have seen […]