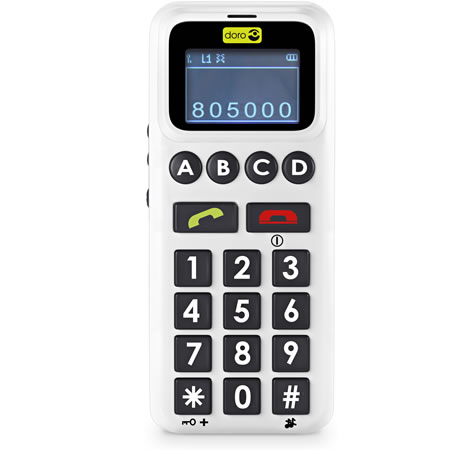 The white phone features oversized black buttons and a high contrast screen. The A to D buttons allows the user to create up to four speed dials.

The Doro HandleEasy 326 GSM will cost around 1 200 Swedish kronor (about $187 USD) when it’s released some time during the next month.

Most mobile phones nowadays are all crammed with so many extra features and functions. They may even put the MP3 players and cameras out of business in a couple of years. But for people who want to use their mobile phones just for calling, then […]

How many times have you wished you had an easy way to start a fire?  Ok for many of us probably none, but for the camper, hiker or outdoorsman, too many to keep track of.  That’s where Swedish FireSteel comes in handy.  It allows for […]

We covered a candy bar Hello Kitty Mobile Phone last month and now DreamKitty.com has announced a slider version that is available in the U.S.

Yet another wristwatch with a built-in mobile phone and lots of other stuff. Much like the cell phone watch we covered some week ago, but with a slightly larger screen, a couple of games, and some other bonus features.

If you thought you had seen it all when it comes to cell phone jammers, think again. Hiding the equipment in a packet of cigarettes is out – the latest trend is apparently to hide the jammer in something that is supposed to look like […]

It seems that having one of those multimedia Bluetooth cell phone watches that covers 83% of your lower arm simply isn’t enough for some – they need it gold plated too.