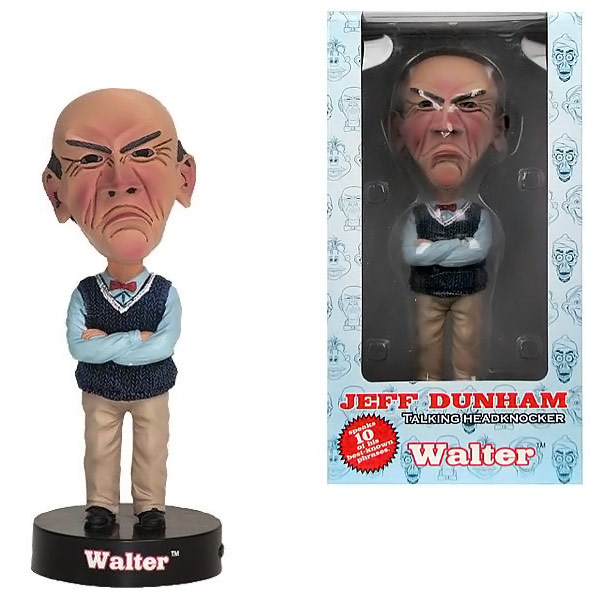 Tired of ventriloquist acts with goofy dolls that say cutesy things and make lame puns? If so, grab the Jeff Dunham Walter Talking Bobble Head and honor the geriatric grump as your savior and hero.

Jeff Dunham is a talented guy but the show doesn’t really get going until he brings out Walter, in my opinion. You can’t help but laugh at Walter because his grumpiness is what makes him funny. Through the mouth of this sourpuss old guy, Dunham brings out the laughs by letting Walter voice the things we’d love to say, if we were brave enough.

Now, you don’t have to catch Walter on stage to hear some of his best lines because the bobble head will say them for you, including gems like:

Let Walter’s bad mood improve yours with the Jeff Dunham Walter Talking Bobble Head for $14.99 at Entertainment Earth and about $23 at Amazon.com.

The first time I heard about Jeff Dunham was when I was still in my third year at University. When I was too stressed from all the studying, I’d take a quick break and unwind by watching a video of the ventriloquist on YouTube. Now you […]

Are you getting sick of that boring doorbell chime? Well, Swann has a simple and fun fix to that problem. The MP3 DJ Doorbell is a customizable wireless doorbell that stores (via removable SD card) and plays music when the doorbell is pressed. The package […]

These kick Ass action figures kick ass. You can choose Hit-Girl, Kick-Ass, or MF’er. If you love the comic books and the movie, you’ll want to collect these figures. These officially licensed Kick-Ass 2 collectibles look great. And they will look great in your collection, […]