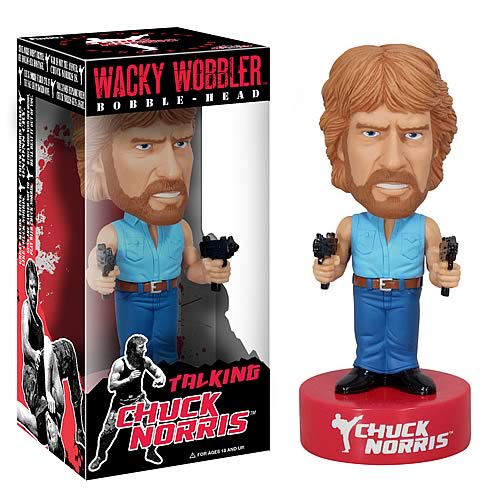 When it comes to tough, nobody beats Chuck Norris. Even the Chuck Norris Talking Bobble Head can kick your butt, and you know we’re talking serious toughness when a Bobble Head doesn’t take crap from anybody.

In addition to adding a whole new level of macho to wherever you place it, the Bobble Head version of Chuck will also spout off a few ‘facts’ about the action hero, with witty Chuckisms like:

Movie fans might also get an extra little charge of excitement when they realize this is the exact same outfit that Chuck wore for “Invasion U.S.A.” 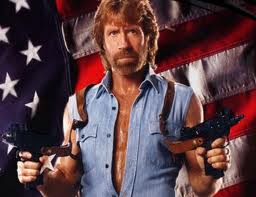 Add some roundhouse-kicking awesomeness to your life with the Chuck Norris Talking Bobble Head for $12.99 from Entertainment Earth.

Action hero Chuck Norris has achieved near-immortality with the popular Chuck Norris ‘facts,’ and that spirit of invincibility is on display with the Chuck Norris Two Speeds T-Shirt. I thought Chuck was all kinds of bad-ass when he was kicking people upside the head in […]

Converse Chuck Taylor Sneakers have been cool for a long time. They’ve gone from the basketball courts to fashion footwear that is great for a variety of occasions. GeekAlerts showed you the Dr. Seuss and Green Eggs & Ham Edition Chucks, but sometimes you need […]