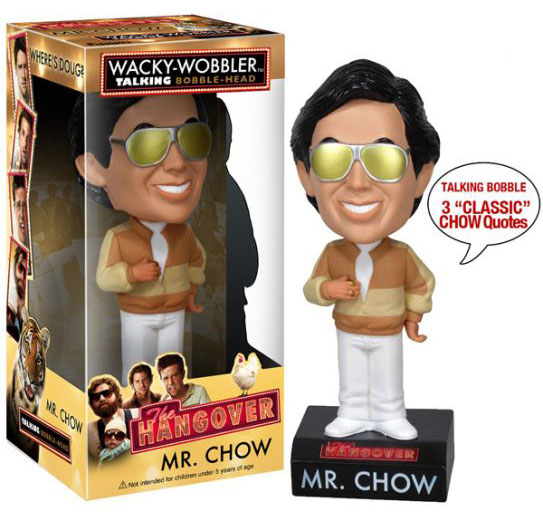 There are some unforgettable characters in the movie “The Hangover,” including Mr. Chow who is like a Long Duck Dong turned gangsta. It may come as no surprise that the movie has inspired its own official merchandise, and one of the novelties in the treasure trove is The Hangover Mr. Chow Talking Bobblehead.

Now, why would anyone want a bobble head of Mr. Chow? Lots of reasons. He’s fearless, he’s dangerous, and everybody loves a fresh-off-the-boat Asian. This bobble head actually makes him look hip in gold shades, white trousers and white shoes. It might be hard for people to determine who the bobble head is until you make him speak some phrases from the film. My first guess would’ve been that this is a bobble head of Fez from “That ’70s Show.” It’s hard to tell with the sunglasses.

The Hangover Mr. Chow Talking Bobble Head
What happens in Vegas stays in Vegas! These talking bobble heads are sure to keep you laughing! Ever have one of those kind of nights? Celebrate the breakout comedy film of 2009 with these outrageous talking bobble heads! Some guys just can’t handle Vegas…and Phil, Stu and Alan are definitely those guys. This hilarious Mr. Chow bobble head speaks the following phrases (subject to change): – “Hahaha, ha, funny…fat guy fall on face.” “Quid pro quo, douchebag.” “What you talking about Willis…that him!” Stands approximately 6-inches tall. Order yours today!

You can buy The Hangover Mr. Chow Talking Bobblehead for $11.99 at Entertainment Earth and for $7.79 at Amazon.com.

If you’re more a fan of Alan’s, then maybe you’d prefer The Hangover Baby Carlos Apron or the Alan with Baby 7 Inch Plush.

You’ve seen the Star Wars Talking Plush by funko; now another great one is here.  The Hangover Alan with Baby 7-inch Plush is a great novelty gift from the hit movie The Hangover.  Everyone loved Zach Galifianakis’s role as Alan and funko decided to honor […]

Even if you already have the Hungover Cookbook, you’ll probably want this Book on Hangover Cures as well. I know many of us are going to need both books and a bottle of aspirin tomorrow, after a solid night of New Years Eve partying today. […]

The Fallout Dogmeat Bobblehead lets you display Dogmeat from Fallout proudly. He was your best buddy in the game and now you can enjoy his company in bobblehead form, either on your shelf or on your desk. He is sitting upright with his shades on, […]

Are you up for another Darth Vader entry? Ok, I’ll make this short and promise that the next Star Wars related item will be with Boba Fett instead. The Darth Vader Tie Fighter Bobble Head ($30) measures approximately 6×5.5 inches and will look great together […]