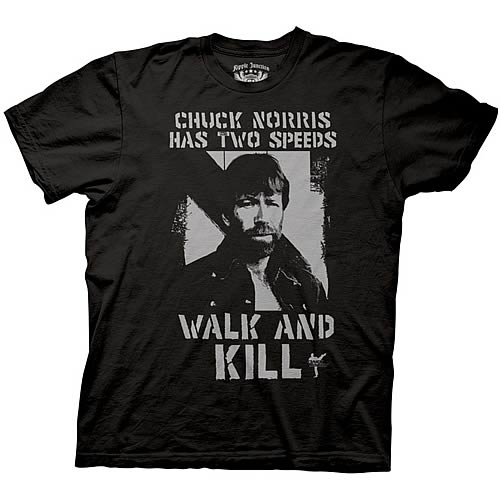 I thought Chuck was all kinds of bad-ass when he was kicking people upside the head in films like A Force of One and The Octagon but it wasn’t until 2005 that Chuck became the ultimate tough guy with the Chuck Norris facts. This comfy t-shirt (can I use words like comfy while talking about Chuck Norris?) shares one of those facts that can be enjoyed by everyone you hang out with… and if they don’t enjoy it, you can always kick them upside the head. It’s what Chuck would want you to do.

It doesn’t seem like ‘walk’ or ‘kill’ leaves much room for variety but I’m sure it’s plenty for a guy like Chuck, and the Chuck Norris Two Speeds T-Shirt is all you need to complete your wardrobe so grab it from Entertainment Earth for $17.99.

Converse Chuck Taylor Sneakers have been cool for a long time. They’ve gone from the basketball courts to fashion footwear that is great for a variety of occasions. GeekAlerts showed you the Dr. Seuss and Green Eggs & Ham Edition Chucks, but sometimes you need […]

If you like zombies, Peanuts, and mash-ups, this You’re a Zombie, Chuck! T-Shirt will be right up your alley.  At first glance this looks like a still from “It’s the Great Pumpkin, Charlie Brown.”  Look closer and you’ll notice that Snoopy and Woodstock have guns […]

These kick Ass action figures kick ass. You can choose Hit-Girl, Kick-Ass, or MF’er. If you love the comic books and the movie, you’ll want to collect these figures. These officially licensed Kick-Ass 2 collectibles look great. And they will look great in your collection, […]

Chun-Li prepares to deliver her devastating Hyakuretsu Kyaku on the Street Fighter Lightning Kick T-Shirt. Put up your dukes, Street Fighter fans, because your perfect shirt has arrived. Artist Jose Real has created an awesome line of t-shirts that feature Street Fighter characters getting ready […]

This Facts from Space! Book is full of stunning facts about, you guessed it, space. It has 10 chapters packed with facts. Did you know that Saturn has 62 moons? It also has too many rings to count. It is by astronomer and Star […]