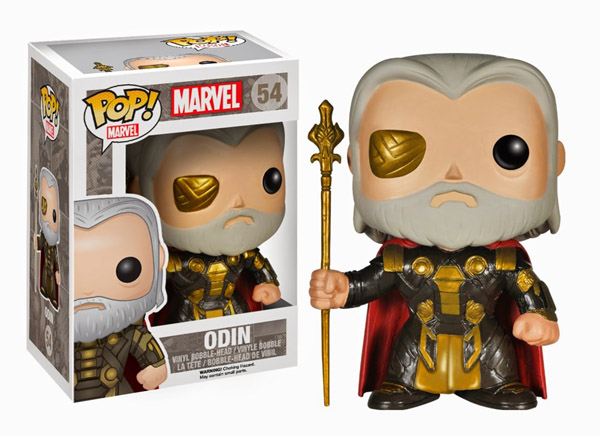 The Thor The Dark World Movie Odin Pop! Vinyl Bobble Head brings us the Asgardian who’s tough enough to put his son, Thor, in his place and cool enough to rock a golden eye patch.

He has the armor, the staff, the beard. He’s the guy that’s awesome enough to lose an eye just to gain knowledge and he happens to be the ruler of a little place called Asgard. If that’s not awesome enough, he’s also proven that he has no problem with giving the God of Thunder a spanking by taking away his hammer and sending him to live with mortals.

Funko captures all that Norse awesome-sauce with this 3 3/4-inch-tall bobble head, adding a little royal flavor to the Pop! Vinyl collection that also recently added Heimdall and Lady Sif.

The Thor The Dark World Movie Odin Pop! Vinyl Bobble Head will be available October 2014 but it can be pre-ordered now for $9.99 at Entertainment Earth.

My! What golden eyes you have. The Thor The Dark World Movie Heimdall with Helmet Pop! Vinyl Bobble Head sees all… so behave yourself. Even from his post at the edge of the Rainbow Bridge, Heimdall sees everything with his golden peepers so it’s understandable […]

Loki and the God of Thunder take a step back as the Thor The Dark World Movie Lady Sif Pop! Vinyl Bobble Head makes her Funko debut. Standing 3 3/4-inches tall, Lady Sif still looks like she’s tough enough to take on any enemy that […]