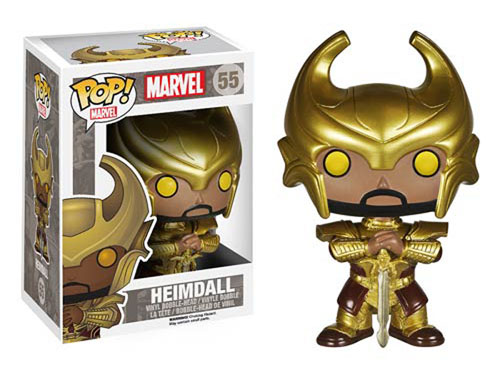 My! What golden eyes you have. The Thor The Dark World Movie Heimdall with Helmet Pop! Vinyl Bobble Head sees all… so behave yourself.

Even from his post at the edge of the Rainbow Bridge, Heimdall sees everything with his golden peepers so it’s understandable if you feel the urge to make this little guy face the wall. Even then, it’s possible that this 3 3/4-inch-tall bobble head will be able to see you… and judge you.

While not as intimidating as Idris Elba, the Funko version of Heimdall is still prepared to defend the Bridge and Asgard, wearing his gold helmet and gold armor, and standing with his sword in a seemingly defenseless position. Don’t believe he’s unprepared, though; the golden-eyed one has already spotted your weakness.

The Thor The Dark World Movie Heimdall with Helmet Pop! Vinyl Bobble Head will be available October 2014 but it can be pre-ordered now for $9.99 at Entertainment Earth.

The guardian of Asgard’s Bifrost Bridge is away from his post with the Thor Ragnarok Heimdall Pop! Vinyl Figure. In the previous Thor films, Heimdall has been more a watcher than a fighter, standing tall in his golden armor and defending the Bifrost bridge from […]

Loki and the God of Thunder take a step back as the Thor The Dark World Movie Lady Sif Pop! Vinyl Bobble Head makes her Funko debut. Standing 3 3/4-inches tall, Lady Sif still looks like she’s tough enough to take on any enemy that […]