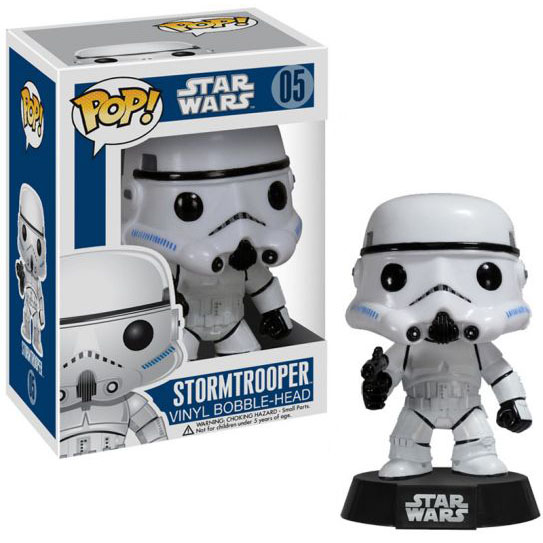 Isn’t that the most adorable and cutest Stormtrooper that you’ve ever seen? This guy would never shoot you with an Imperial Blaster or serve an evil empire. Well, maybe he would, but if he did, it would be in a cute way. This Star Wars Stormtrooper Pop! Vinyl Figure Bobble Head is perfect for your Star Wars collection.

You can display him with all of your other Star Wars stuff, but this guy is going to be the star of the show. He stands 3 3/4-inches tall and his head even turns.

You can’t beat a cute Stormtrooper. Well, you could, but anyway. He is under $10 at Entertainment Earth, Amazon.com and Urban Collector and $12.90 at Buy.com.

If you’re stuck going to an office job that requires you to dress up in a shirt and tie every day, then you’re probably not having very much fun. But look at it this way, at least you have a job and you can always […]

Stormtroopers are cool. The design of the armor is just awesome. It says, “I work for the evil empire and I will crush you”. This LEGO Star Wars Stormtrooper Key Light may not be as menacing as a full sized Stormtrooper, but it will will […]

The Empire may be evil, but you have to admit, their Stormtrooper suits are amazingly designed. They just look cool. That’s probably why we love them so much. Now you can have a small Stormtrooper head on your desk that will take care of all […]

Just in time for Halloween, Star Wars and monsters collide to unleash this amazingly spooky Star Wars Stormtrooper Mini Monster Mash-Up. He’s a stormtrooper. He’s a skeleton. He’s the most gruesome Stormtrooper ever. If you prefer your Star Wars characters to look creepier than normal, […]

Sure, he’s not the most feared guy in the galaxy, but the Stormtrooper is always ready for a good battle with the rebels…and now you can be ready, too. The Star Wars Supreme Edition Stormtrooper Costume is as expensive as it sounds, but it looks […]