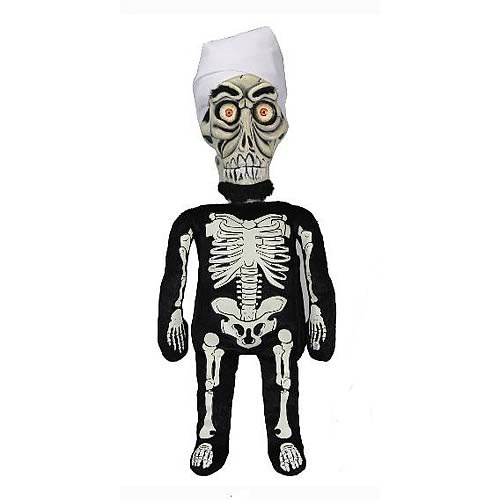 The first time I heard about Jeff Dunham was when I was still in my third year at University. When I was too stressed from all the studying, I’d take a quick break and unwind by watching a video of the ventriloquist on YouTube. Now you can channel a bit of Jeff yourself with the Jeff Dunham Achmed Talking Animatronic Doll.

So you might not know how to throw your voice, but that won’t be a problem if you’ve got the Jeff Dunham Achmed Talking Animatronic Doll–because it’s going to be doing all the talking for you. Just press Achmed’s bony hands to hear him spew out some of his signature lines for a few laughs.

The Jeff Dunham Achmed Talking Animatronic Doll is available from Entertainment Earth for $43.99.

If you love this one meme among all others, you need to purchase this Keyboard Cat Animatronic Plush right now. It’s plush, it’s a cat playing the keyboard. It’s amazing is what it is. This meme comes to your home as an animatronic plush. Just […]

Do you have $350k that you’re just itching to spend?  If so, The 20 Foot Animatronic Triceratops could be yours.  This is the same motion-sensing 20′ Triceratops that your see at museums all over the country.  This is a finely crafted machine with no details […]

How do you know what a Wookie is saying? The answer is, it doesn’t matter. As long as your limbs are still in the sockets it’s all good. Speaking of Wookies, this Star Wars 24 inch Deluxe Talking Chewbacca is adorable. Look at that little […]