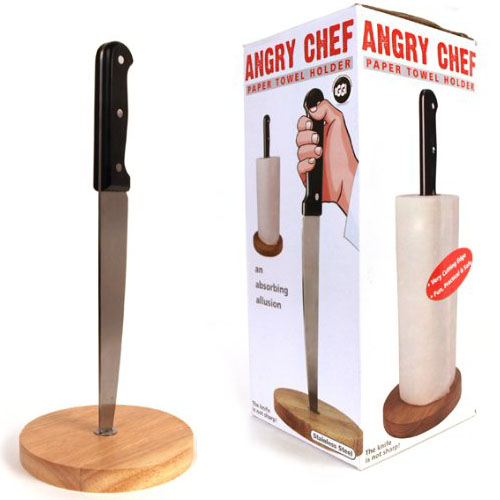 Greedy pigs have learned that stirring anger amongst birds means war. Greedy pigs are quickly learning that it’s wise not to anger chefs in the kitchen, either. When you stick your paper towel roll on the IGGI Angry Chef Paper Towel Holder, it serves as a good reminder to greedy pigs to clean up their spills in the kitchen and fast; or else.

This sharp-looking carving knife won’t actually make you bleed your own blood, but it’s a hard concept to get through to your subconscious mind. Not only will this paper towel holder remind you to clean up the messes you made, it also warns you to replace the paper towel rolls when they’re empty. Otherwise, you’ll have to live with seeing the knife glaring back at you from the kitchen counter, as if some angry person stabbed it into the chopping block. It’s like the ultimate cliché scene that shows up in horror films.

The IGGI Angry Chef Paper Towel Holder that looks like it might’ve been thrown by Gordon Ramsey of “Hell’s Kitchen” can be found at I Want One of Those for £17.99 and at Amazon.co.uk for £14.95.

Check out the Bloody Knife Spatula, Mordicus Crocodile Bread Knife, and the Bloody Bath Hand Towel for more freakish stuff to put in your kitchen.

The “Clean Cut” is a handy automatic electronic paper towel dispenser that works with your favorite roll of paper and keeps you from using more than needed. To use, simply place your hand between the LED sensors in the dispense zone (right side). Once the […]