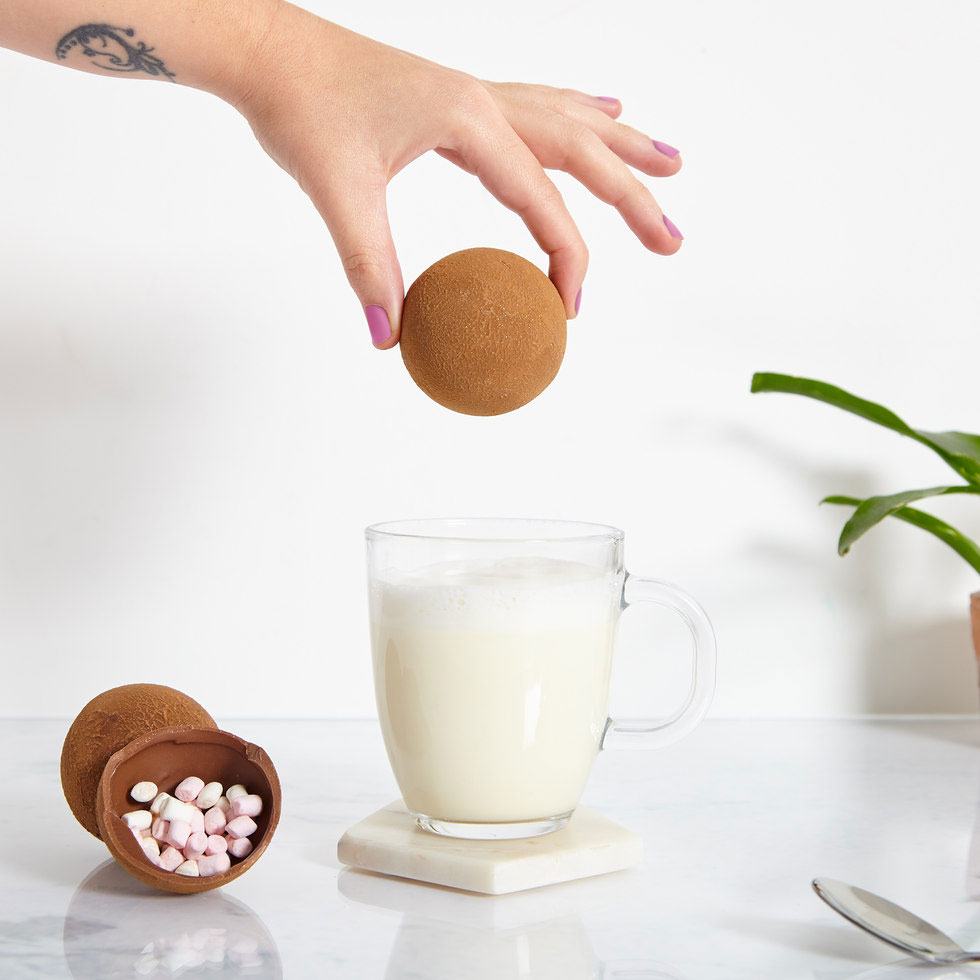 Pop one of these Hot Chocolate Bombs into a glass of warm milk for an incredible cup of hot cocoa. Instead of powdered cocoa, this has thick Belgian milk chocolate that will slowly melt to deliver an indulgent drink. Plus the milk chocolate sphere is filled with mini marshmallows, to deliver that extra sweetness.

There’s no rule that says these have to be used for hot chocolate either. Imagine the tasty treat of eating one of these like an apple!

While bath bombs come in endless varieties and make a nice gift, not everyone takes baths, as most people prefer showers. On the other hand, these would make a great gift for almost anyone, because doesn’t everyone like chocolate?

Powdered hot chocolate? Whatever you say, Grandma. There’s a new hot chocolate format on the scene and once you try it, you’ll never go back to Options.

Simply chuck one of these powerful bombes into hot milk and BOOM. No, not an explosion, but the thick Belgian milk chocolate slowly melts to form the perfect decadent cup of cocoa.

And that’s not even the best bit! Each bombe is filled to the brim with miniature marshmallows for an extra lick of soft, pillowy sweetness. Hot chocolate doesn’t get better (or easier) than this!

These Hot Chocolate Bombs are sold at Firebox for £8.99 / $11.99 for a 3 pack. There’s just a couple of problems. First, they’re not able to ship this to the United States at this time. Second, they can’t ship it anywhere until early 2019, as they are totally out of stock. They’re also sold at PrezzyBox and Qwerkity, but they’re out of stock at those merchants too.

Brrr. It’s getting colder and pretty soon many of us will be experiencing the dark wrath of the daylight savings time change, aka “fall backwards.” Productivity will start to dwindle and we’ll all want to make like the bears and hibernate. But no, we must […]

Hot Chocolate on a Stick

Who would have thought that one day, you’d be enjoying Hot Chocolate on a Stick? These may look like popsicles, but I wouldn’t recommend putting these delicious-looking treats in your mouth because they’re actually chocolate flavoring that’s meant to be stirred in a steaming cup of […]

The Force will be strong in you when you chase away the winter chill with the Star Wars Ceramic Goblets with Hot Cocoa Mix, letting you embrace your inner Jedi, Sith Lord, or Wookiee. About the only thing better than sitting in front of the […]

What happens when chocolate looks so awesome you hate to eat it? It’s a difficult dilemma but something as wickedly cool as Chocolate Skulls makes the challenge worth it. There’s a good chance these bones were actually productive people just living their lives before running […]

If you’re trying to avoid the sweets but have an undeniable love for chocolate, the Instant Regret Chocolate Bar is exactly what you need to teach you to avoid chocolate as if your life (or at least your taste buds) depended on it…the same goes […]

Instagrams are all over the Interwebz these days, providing wisdom and laughter wherever they go, but you can’t eat them; not even if you print them out. The Instagram Chocolate Card adds the extra dimension of taste by letting you have a photo and personalized […]