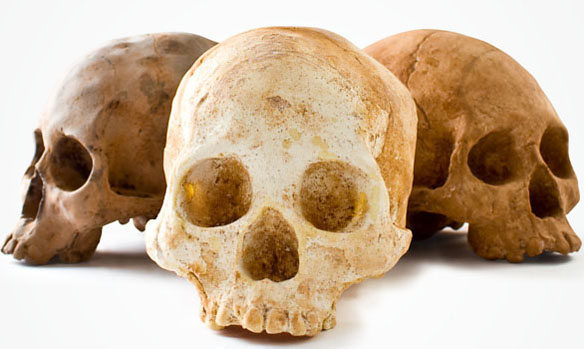 What happens when chocolate looks so awesome you hate to eat it? It’s a difficult dilemma but something as wickedly cool as Chocolate Skulls makes the challenge worth it.

There’s a good chance these bones were actually productive people just living their lives before running into someone packing Chocolate Ammo, or maybe it’s easier to believe these skulls are so realistic because they were molded on an authentic human skull. Hmmm. Actually both of those ideas sound pretty weird, but that last one happens to be true, and using the real deal for the design means these macabre munchies are incredibly realistic.

The skulls, weighing in at approximately 2.5kgs (5 pounds, 8 ounces), are available in three flavors of rich, high-quality Belgian chocolate (white chocolate, milk chocolate, dark chocolate) and they’re edible for up to a year if kept in a cool, dry place. Just try that with a real skull. You’ll find they’re not as tasty after that much time has passed. You also don’t get a Certificate of Authenticity if you go grave-hopping for real bones; so chocolate is definitely the way to go.

Add a little confectionery creepiness to your diet with Chocolate Skulls for $542.89 from Firebox.com.

Hot Chocolate on a Stick

Who would have thought that one day, you’d be enjoying Hot Chocolate on a Stick? These may look like popsicles, but I wouldn’t recommend putting these delicious-looking treats in your mouth because they’re actually chocolate flavoring that’s meant to be stirred in a steaming cup of […]

When you skin your knee, say Arrrgh like a pirate instead of ouch. These Ouch! Skulls and Bones Bandages are how pirates tend to their wounds. Well, unless they lose a leg, then they just make a peg leg.

First, people came up with a way to share their favorite movie theater snacks and treats with their canine best friends with the Doggy Snack Packs. Now it’s time for some high-class eats and flavors with the Gourmet Edible Tasty Bones Dog Treats.