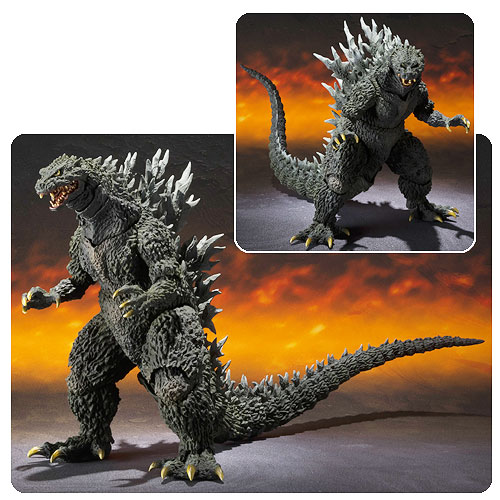 Your toy collection needs a true beast. Something that can stomp its way through cities and cause Earthquakes. Like Godzilla! This Godzilla 2000 Millenium Special Color Edition SH MonsterArts Action Figure is exactly what you need.

This is Godzilla from the Godzilla 2000 film. He features special coloring and measures over 6-inches tall. He also has articulated joints so you can pose him in many ways. The Millenium version has a leaner sculpt than his predecessors, making for a nice lean stomping machine.

Godzilla fans will not want to miss this one. He is only $74.99 from Entertainment Earth. Pre-order him now for July of 2015. Also at Amazon.com.

Nobody can attack a pizza like Godzilla and this Godzilla 2000 Pizza Cutter will do a nice job. Besides, if you can distract Godzilla with pizza he won’t wreck your city. If you have a monstrous hunger, you need a monstrous slice of pizza. This […]

Don’t think Godzilla got enough screen time in his new movie? The big, mean, city-destroying machine can be stared at to your heart’s content with the Godzilla Peel and Stick Giant Wall Decal. Bring the king of monsters home with you in a way that […]

Stomping off the big screen and into your home is the King of Monsters with the Godzilla Maquette. Designed and developed using original digital assets from the 2014 film, Godzilla, this 24-inch-tall statue features a detailed look at the mighty creature who sometimes seems a […]