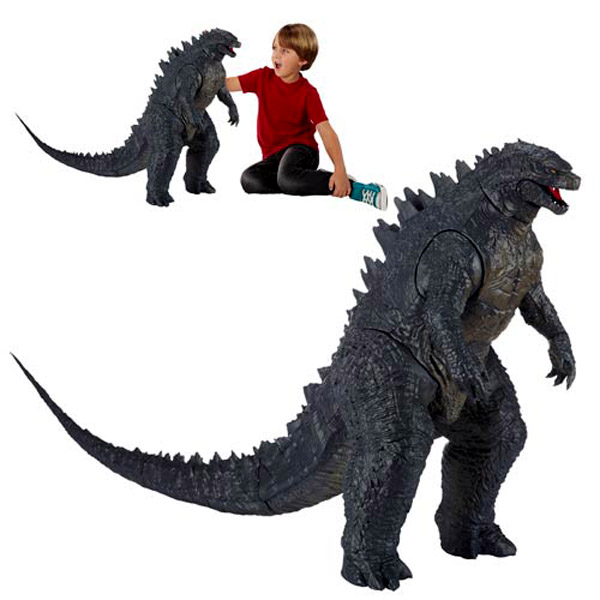 The original mean, green, city-destroying machine is back with the Godzilla 2014 Movie 24-Inch Action Figure, bringing the classic Kaiju to the 21st Century.

It’s been a long time since Godzilla waded out of the ocean and onto the shores of the United States, introducing a whole new generation to the goodness that is Godzilla. And no, for the record, I don’t count the 1998 film that starred the War Games kid because that wasn’t Godzilla; merely a cheap impostor posing as the real deal.

Just like the on-screen version, the action figure version of Godzilla is BIG, measuring 24-inches and featuring 12 different points of articulation. 3 of those points are just in the tail. Yeah, the big ‘G’ apparently isn’t very limber but how much flexibility do you need when you’re that big?

The Godzilla 2014 Movie 24-Inch Action Figure will be available May 2014 but it can be pre-ordered now for $49.99 at Entertainment Earth.

No one is scarier than Godzilla. He has trashed whole cities while fighting other monsters. What’s scarier than that? Well, now you can explore the cuddly side of this terrifying monster with this Godzilla 6-Inch Plush. At 6 inches tall, he can still terrorize LEGO […]

Don’t think Godzilla got enough screen time in his new movie? The big, mean, city-destroying machine can be stared at to your heart’s content with the Godzilla Peel and Stick Giant Wall Decal. Bring the king of monsters home with you in a way that […]

The Godzilla Deluxe Adult Air-Blown Costume is the perfect outfit to wear when you feel like setting up a tiny city and then knocking it down. It also works wonders in letting your neighbors know that you’re very, very strange. You probably won’t be mistaken […]