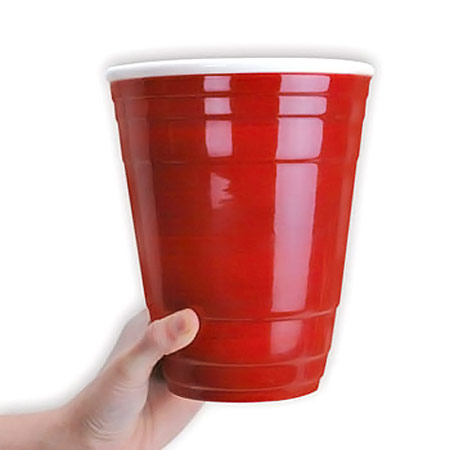 If you’re ready to party hard but don’t want to be bothered with constantly getting a refill, you can always just use the Giant Red Cup, which could also be known as the One Cup That Rules Them All.

There’s no doubt about it. People will know you’ve got some serious hydrating planned when they see you toting this bad boy around. You might get fancy with the Red Cup Wine Glasses or slam down some hard liquor with the Red Cup Ceramic Shot Glasses, but there ain’t no play associated with this whopper because it’s all about the drink.

Get your drink on with the Giant Red Cup for $14.95. (Update: Link removed because the website is gone and this product could not be located in stock anywhere else. Consider other related products like the Red Cup Koozie, Red Cup Wine Glasses, and Red Cup Shot Glasses.)

Those big, red Solo cups are a familiar sight at picnics and backyard BBQ’s, holding everything from cola to your favorite booze. For many of us, they are immediately associated with college keggers and house parties. That classic look has been captured in miniature form […]

If you ever worry about feeling like a snob when you drink wine from your fancy-smancy wine glasses, you can always dial things down a notch with the Red Cup Wine Glasses. Although they’re made of fine-quality ceramic, these glasses look just like the classic […]