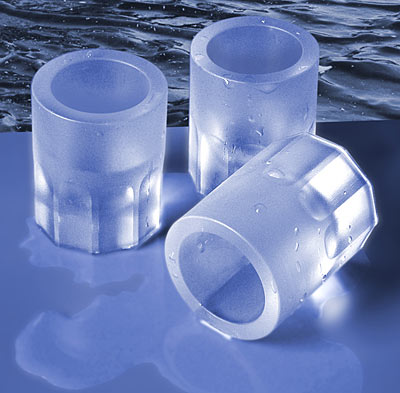 Younger guys like to look cool while they are partying, so why not literally lower your drinks down a few degrees with the Cool Shooters Ice Shot Glasses.  The Cool Shooters Ice Shot Glasses can be formed by using the uniquely-shaped ice molds so you can enjoy your drinks on and surrounded by a rock. Chug down your drink quickly though, or else you’ll have a pretty messy situation in your hands that’s going to be totally uncool. 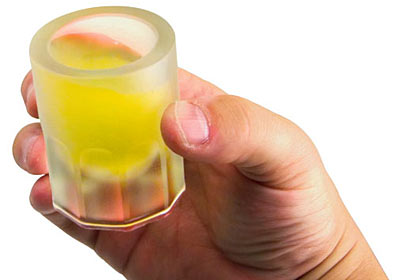 The two biggest problems in hosting a truly epic party are keeping the drinks cold, and glass breakage. So, the good scientists at ThinkGeek Hootenanny Industries, L.L.C. realized there was a need begging for a product. After weeks of study and drinking well into the night, we found the Cool Shooters Ice shot glasses tray.

This silicon rubber tray is shaped like the negative of picardie style shot glasses. Just pour in some water, stick them in the fridge for an hour or so, and unmold 4 perfect shot glasses designed to keep two ounces of your favorite alcohol deliciously chilly while keeping your precious Austrian crystal barware safe and sound.

Take a shot or six with this Six Shooters Ice Shots Mold. This mold will make 6 shot glasses from ice for some amazing party fun. It’s perfect for playing drinking games with your friends. The ice is in each glass. Literally. Just freeze and […]

Take your drink to the next level with these Whiskey Stone Shot Glasses. They serve as pretty good alternatives to the Cool Shooters Ice Shot Glasses and you won’t have to worry about getting your drink down in a hurry so your glass won’t melt […]

There’s no need to call the lifeguard because the only thing that’s swimming around in your drink are these fin-shaped ice cubes care of the Shark Fin Ice Tray. For double the fun, mix up the ice cubes with the ones you made with the […]