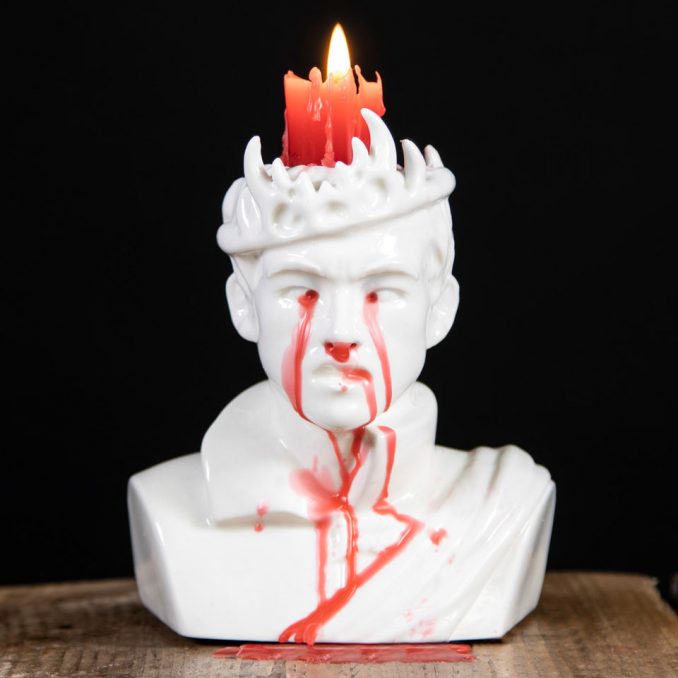 While it is hard to top that Raiders of the Lost Ark Melting Face Candle, this Game of Thrones Bleeding Joffrey Candle just might do it for diehard GoT fans that consider Joffrey Baratheon the most hated character of all time. It allows you to recreate the death scene where Joffrey bleeds through his nose whenever you want to.

It actually isn’t a candle, but a ceramic candle holder that can be used again and again. Just stick a red candle (two are included) and light it, and the wax will drip out of his eye and nose looking like blood.

We can all look back fondly at the glorious moment he finally met his end. Those trembling bloodshot eyes, that frothing mouth, his snivelling purple face looking like it’s about to pop. Never has something so traumatic elicited such a joyous reaction.

It’s arguably one of the most satisfying moments in the entire series. What a f*cking relief.

Now you can re-live a slightly less dramatic version with the Bleeding Joffrey Candle. Sure, he won’t cough and splutter or complain about his pie being dry – but light up that wick and he’ll bleed endlessly from his eyes and nose.

We’ve even included a handy nose-picker tool in case the contemptible f*cker boy king gets bunged up – so you can celebrate his death over and over again!

If the Bleeding Joffrey Candle wasn’t quite awesome enough for you, check out this Game of Thrones Night King Candle. This superbly-detailed candle is shaped in the creepy likeness of the Night King, the master of the White Walkers. It is officially licensed and stands […]

Joffrey Baratheon has become the character everyone loves to hate because he’s the worst type of spoiled, whiny brat there is – the type with the power to have your head chopped off. The Game of Thrones Joffrey Perfect Target Poster lets you put your […]