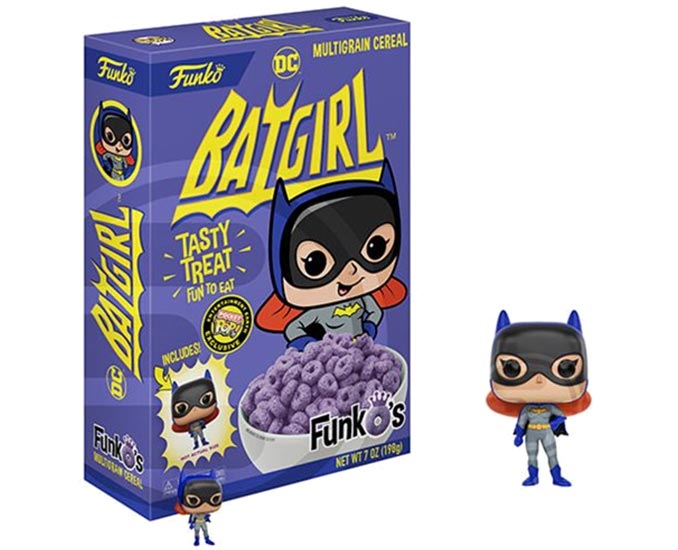 As you probably already know from the FunkO’s Beetlejuice Cereal, Funko has a line of breakfast cereals that come with mini vinyl figures. The latest is FunkO’s Batgirl Cereal with Pocket Pop!, which features purple multigrain cereal and an exclusive Batgirl Pocket Pop! mini-figure.

Even if purple multi-grain cereal isn’t exactly your first choice for breakfast, it is the only way to get one of these cool 1.5″ tall Batgirl vinyl figures. It sure is a much better prize than you get with your typical cereal these days, which is nothing. Perhaps these cereals from Funko will inspire the big companies to start putting prizes in the box again.

Breakfast with Batgirl! Make breakfast more fun! Pour yourself a tasty bowl of Funko’s to start the day (or Netflix binge) off on the right foot. This treat gets even sweeter when you dig in to find the prize – a Pocket Pop! Vinyl Figure measuring approximately 1 1/2-inches tall! The toy is made in Vietnam. Cereal is packed and distributed in the United States. This Funko’s Batgirl Pop! Cereal includes 7 ounces of multigrain cereal and the exclusive mini-figure!

FunkO’s Batgirl Cereal is available for $9.99 exclusively at Entertainment Earth.

When most people think of Funko, they think of the adorable vinyl figures, not breakfast cereal. FunkO’s Beetlejuice Cereal with Pocket Pop! is a tasty multigrain cereal. The key with FunkO’s cereal is they come with a prize inside, in this case, a Pocket Pop! […]

These WTF Prank Candles start like normal scented candles, offering a delicious scent to make the whole room smell nice. However, after an hour or two of burning, they suddenly switch to an awful putrid odor. The prankee will have no idea what hit them. […]