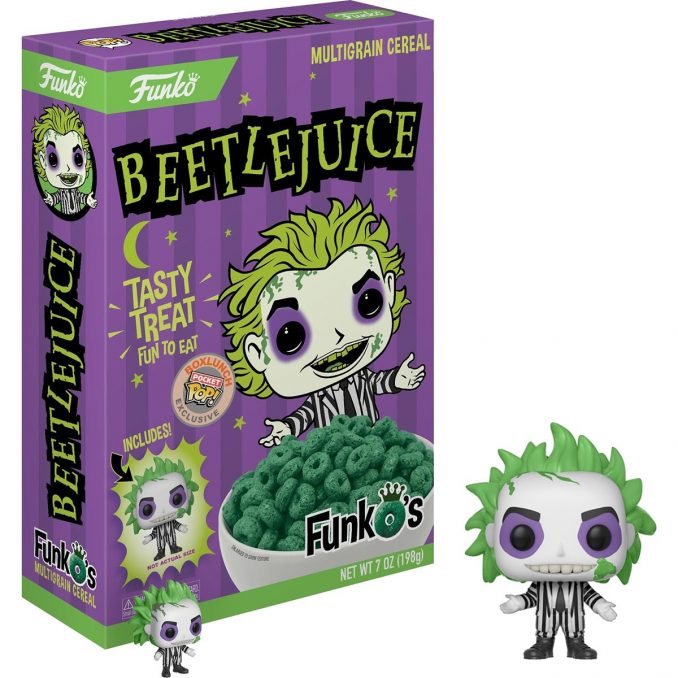 If you love Beetlejuice or just yearn for the days of old when cereal came with prizes inside, you’ll want to pick up a box of this collectible FunkO’s Beetlejuice Cereal. The cereal is made in the USA and the Pocket Pop! vinyl figure inside measures about 1.5″ tall.

Say his name three times and you’ll summon from beyond FunkO’s newest cereal creature, a mischievous ghost who will feed you green cereal and likely haunt your house. Bring a quirky, gothic aesthetic to every morning meal. Each box comes with an exclusive Beetlejuice Pop!

Thought you had seen it all from Funko? Well think again. Introducing FunkO’s, the new collectible cereal from the pop culture wizards at Funko. Each box comes with a Pocket Pop! of one of the characters.

This Beetlejuice box of FunkO’s comes with a Beetlejuice Pocket Pop!, and the green, multigrain cereal is bound to wow you at breakfast time. That’s if you decide to eat it and not keep it intact with your Funko collection! Grab a box today and make your Saturday mornings fun again.

FunkO’s Beetlejuice Cereal with Pocket Pop! is available exclusively at BoxLunch and costs $10.90