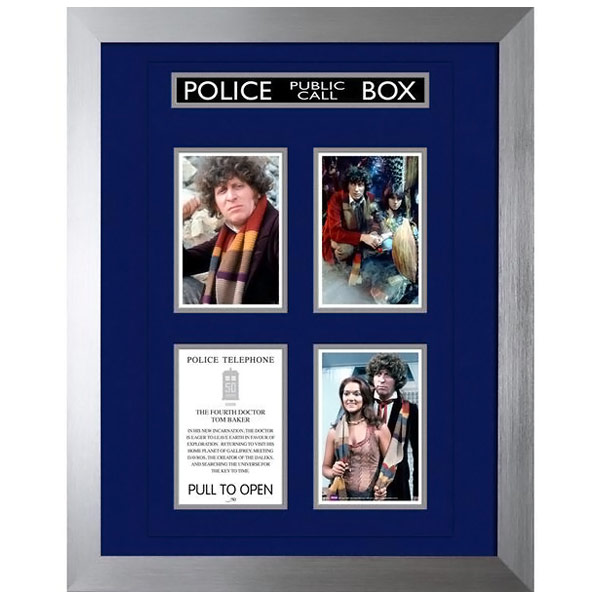 It’s been a long while since the guy with the big nose and extra-long scarf bounced around time and space in the TARDIS but the Fourth Doctor 50th Anniversary Deluxe Framed Print lets Doctor Who fans know that #4 will always be around in Whovian memory.

50 years is a big milestone for a TV show so it makes perfect sense to celebrate Doctor Who’s 50th anniversary with a person that hold another impressive milestone; Tom Baker portrayed the fourth incarnation of the Time Lord for seven consecutive seasons (December 28, 1974 – March 21, 1981), making him the longest-living incarnation of the Doctor during the show’s entire run.

The Deluxe Framed Print, which is colored TARDIS-blue and features the iconic ‘Police Box’ sign, features a solo image of Tom Baker as the Doctor, two photos of the Doctor with Companions, and a brief bio of Baker’s character.

You can get the Fourth Doctor 50th Anniversary Deluxe Framed Print now for £59.99/$90.82 at ForbiddenPlanet.com.

Is a TARDIS by any other color besides blue still a TARDIS? You might ask yourself that question with the Doctor Who 50th Anniversary TARDIS Bobble Head w/Sound but it’s still a great item for Whovians that aren’t really into being blue. You’ve probably already […]