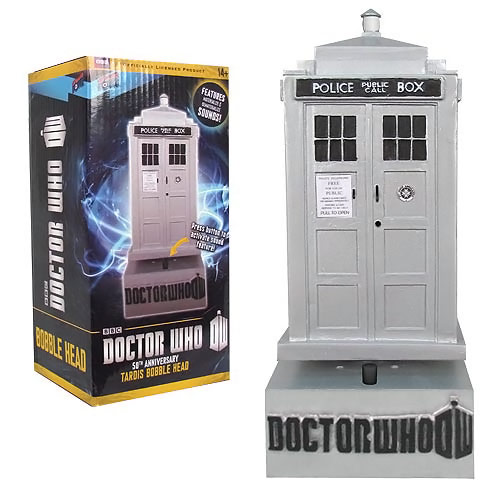 Is a TARDIS by any other color besides blue still a TARDIS? You might ask yourself that question with the Doctor Who 50th Anniversary TARDIS Bobble Head w/Sound but it’s still a great item for Whovians that aren’t really into being blue.

You’ve probably already added the Doctor Who TARDIS Bobble with Sound to your Doctor Who collection but you still might want to consider this version of the Doctor’s ride because it celebrates 50 years of traveling through time and space with everyone’s favorite Time Lord. Why is the TARDIS silver when the traditional color for a 50th anniversary is gold? I’m afraid you’ll have to ask the Doctor that.

The bobble head measures approximately 6 3/4-inches tall x 2 3/4-inches wide x 2 3/4-inches long and rests on a Doctor Who-themed base that includes a button to trigger the familiar TARDIS sounds that signify the Doctor is off on another adventure… with the parking brake on.

The Doctor Who 50th Anniversary TARDIS Bobble Head w/Sound can be pre-ordered for $19.99 at Entertainment Earth and it’s expected to ship in March 2013.