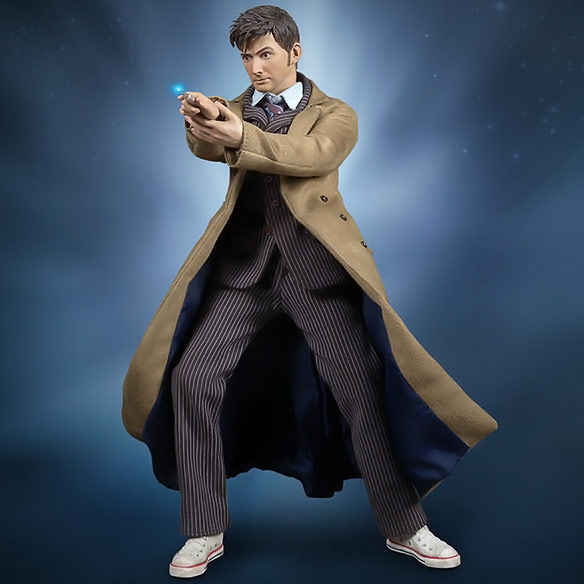 The 50th anniversary of Doctor Who is upon us and some truly great person that deserves a special trip in the TARDIS decided one of the best ways to celebrate was by offering up this mind-blowingly awesome Doctor Who Tenth Doctor 50th Anniversary Limited Edition Figure.

Just look at that face. It’s almost like someone (possibly a Cyberman) took David Tennant and shrunk him down to doll size, and that attention to detail isn’t an accident because the artists studied countless reference photographs to make sure the details were as authentic as possible.

The figure is also dressed in his brown, pinstriped suit and trademark trench coat, and he comes with numerous accessories:

Each officially licensed figure is also numbered and includes an accompanying certificate of authenticity.

Of course, you know there has to be a catch with all this Whovian goodness. There are only 1000 of these 50th Anniversary figures being made, and you know there are more than a 1000 Doctor Who fans in the world so you don’t want to waste any time.

The Doctor Who Tenth Doctor 50th Anniversary Limited Edition Figure is expected to ship in July 2013 but you can pre-order now for £169.99/$268.58 at Big Chief Studios.