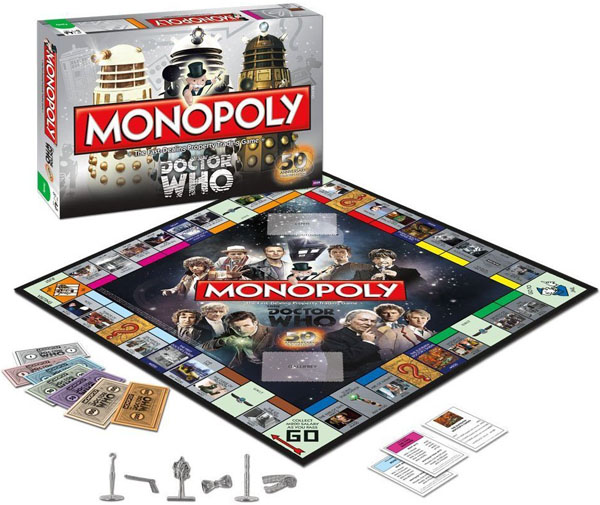 Become a master of time, space, and money with the Doctor Who 50th Anniversary Monopoly, and let all your friends know that buying up all the property is cool now.

Matt Smith is the current occupant of the TARDIS but Doctor Who has been around for half a century, and this special anniversary edition celebrates all the past incarnations of the Doctor, as well as the current one.

The game spans the entire Doctor Who universe, with 22 of the most iconic episodes, including “The Poison Sky,” “A Good Man Goes to War,” “Genesis of the Daleks,” and “Omega,” being referenced. Game pieces consist of objects that will be familiar to most dedicated Whovians: Umbrella, Sonic Screwdriver, Celery, Recorder, Bow Tie, and Scarf.

The major downside to playing Monopoly is that it can take forever. Fortunately, we’re talking about a game that features a Time Lord so there’s a special 60-minute speed-play option to kick things into high gear.

The Doctor Who 50th Anniversary Monopoly is available now for about $35 at Amazon.com and for €40.19 ($51.28) at Iwantoneofthose.com, or you can pre-order it for $39.99 at Entertainment Earth and have it delivered to you some time this month.

UPDATE November 2012: Doctor Who Monopoly is now available at ThinkGeek.com for $39.99.

Monopoly fans who are also Doctor Who fans have been waiting for the Doctor Who Monopoly edition that we first showed you several months ago. It came and went fast at the other retailers, but we found another great source for you if you still […]