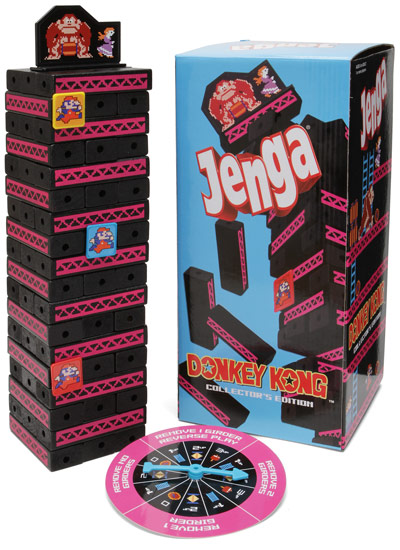 Leave it to geeks to not be able to leave a perfectly fun, simple game well enough alone. The Donkey Kong Jenga: Collector’s Edition game is a challenging mutant hybrid of, you guessed it, Jenga and the premise of the video game Donkey Kong, in one. Sporting the original graphics of the original Donkey Kong video game, notice the black Jenga blocks disguised as neon pink “girders” (def.: large construction beams), the point of the 4-player game is to be the first of 4 Marios to get to the top and save Pauline. Though Mario must be careful not to knock down the tower and make her plunge to her death in the process. Game Over. 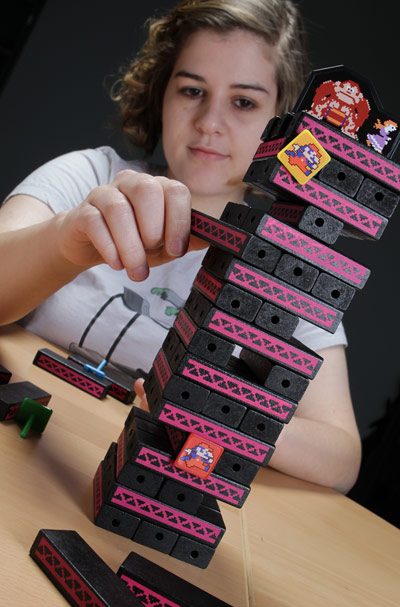 Each player must spin the spinner before each turn and do what it says. Hammers, springboards and ladders allow Mario to move upwards, but a barrel means he loses a turn and stays put. Mario game pieces are inserted into the girder holes, allowing our plumbing hero to scale the tower. For each turn, Mario must move to a different, adjacent side of the tower than the side he was on. But if an opponent Mario is occupying that particular girder he’s about to jump to, player Mario has to move one level above that opponent. Next step gets back to Jenga; one girder must be removed and placed on top of the tower, while Donkey Kong and Pauline are placed on the tippy top. Pretty confusing, huh? But you’ll get the hang of it. This game is designed for 6-year-olds and up, so it can’t be that hard. 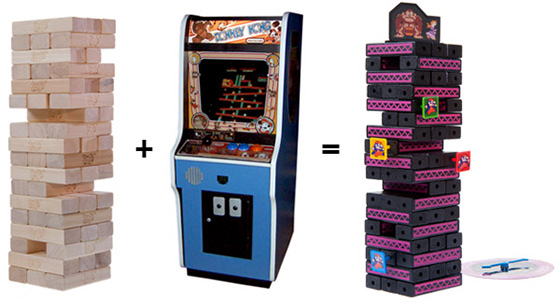 There is a fun sabotage rule that lets you remove a girder occupied by an opponent Mario and bump him down one level, which grants you the opportunity to be a bully and talk smack amongst your friends and family.

The Donkey Kong Jenga: Collector’s Edition game is available at Vat19 for $24.95 and at Think Geek for $19.99. It makes a unique gift, and also makes its lucky owner better than everyone else because it’s a collector’s edition!

Meanwhile, if you still yearn for the days of Donkey Kong and the original Super Mario Bros., maybe putting up some colorful Nintendo Wall Decals would bring you back to a time when things were easy.

I’m a sucker for anything having to do with old school video games. That’s why I really love this Nintendo Donkey Kong Plush Mini Backpack. It will store your small stuff and you get to carry a plush Donkey Kong on your back. This backpack […]

If Donkey Kong is your thing, and you don’t need the 45 extra games that comes with with this other arcade gaming table, this might be just the ticket.

Get ready for a whole new spin on Jenga. Space Invaders Jenga takes the game and adds some awesome retro video game style. This Space Invaders-themed Jenga set even has a second type of game play. As you remove blocks, you’re also trying to move […]

Drum Your Way Through Donkey Kong

Are you looking for some collectible candy fun? Maybe something with Nintendo style? How about trying the Nintendo Zelda, Donkey Kong, Super Mario Klik Candy Dispensers? These hard candy dispensers resemble those famous PEZ dispensers, but offer Nintendo fans something more than just delicious candy; […]

I love old arcade games and I am a sucker for all things Donkey Kong, so you know I’m getting this shirt. It’s on like Kong! How many quarters did you waste trying to rescue your girlfriend from a giant ape? I know I wasted […]