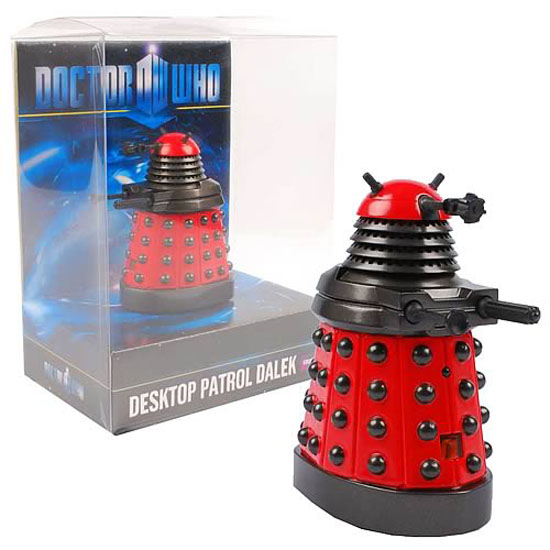 I recently became aware that I was neglecting a certain segment of the Whovian population out there. We’ve seen everything from the Doctor Who Exclusive Third Doctor Sonic Screwdriver to the 11th Doctor Who Sonic Screwdriver Prop Replica and even a Doctor Who Levitating TARDIS because the Doctor just isn’t himself without his inter-dimensional phone-box… BUT, what good is a hero without a villain? For those who love the Doctor’s diabolical baddies, I introduce to you the Doctor Who Red Desktop Patrol Dalek.

Since he’s only about 4-inches tall, he’s not as menacing as his bigger cousins but his eternal vigilance will make any intruder re-think trespassing on your turf. Built-in sensors allow the Dalek to detect the ground in front of it so it will never bump into any thing or take a dive off your desk, and it will strike fear in its enemies as it says “Exterminate” at each and every turn.

Celebrate Doctor Who by honoring the villains that help make him great with the Doctor Who Red Desktop Patrol Dalek for $35.99 from Entertainment Earth.

Your Doctor Who toys should be scared. Very scared. This Doctor Who Dalek Patrol Ship & Figure is coming for them. This highly detailed deluxe Dalek battle vehicle will be a great addition to your collection. It has a real working cannon that fires and […]