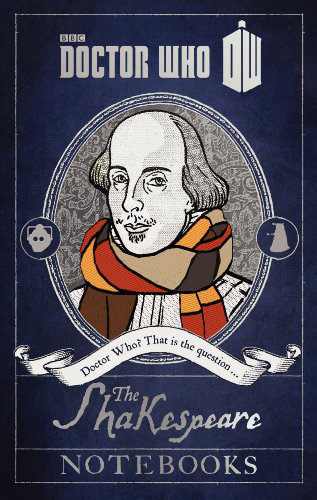 Did you know that when the Doctor met William Shakespeare at the Globe Theater in 1599, it wasn’t the first time? The Doctor Who The Shakespeare Notebooks will clear it all up for you.

Drawn from recently-discovered archives, The Shakespeare Notebooks offers conclusive proof that the Doctor not only appeared throughout Shakespeare’s life, but had a significant impact on his writing. In this book you’ll find early drafts of scenes and notes for characters that never appeared in the plays, discarded lines of dialogue and sonnets, never-before-seen journal entries; and more.

If you have to take notes or you like to doodle, why not do it in something cool? The Star Wars Limited Edition Moleskine Notebooks come in different sizes with ruled or blank pages and include a mini poster of the original Star Wars movie. […]

These Table Tennis Notebooks make sure that you can always play a game. You get 2 notebooks with built-in paddles + 1 net notebook. All you need is the table and the balls. If you love table tennis, take notes with these notebooks between plays. […]

Weapons like the Zombie Killer Knives and the AR-7 Rifle are cool, but need to be treated with respect and are only appropriate for certain situations…Zombie attack, trying to survive an apocalypse, supervised target practice, etc. The Armed Notebooks on the other hand, are perfect […]

These Color-Changing Sequin Notebooks are like getting two notebooks in one. You can choose from Mermaid (Teal/Blue) or Unicorn (Rainbow/Silver). Just run your hands over them to change the color. It’s like magic. Plus you can draw or write messages in the sequins. How cool […]

Thou has not so much brain as ear wax. Well, there’s something to make you re-think spending your hard-earned money on some useless bauble. The Shakespeare Insult Wallet might make you laugh, it might make you cry, and it might even give you a new […]

People who like to build with Lego generally have creative ideas streaming through their minds 24/7. While it’s easy to type ideas on the computer or a tablet, sometimes it’s best to go old-school and write things down by hand. Instead of juggling your extra special […]