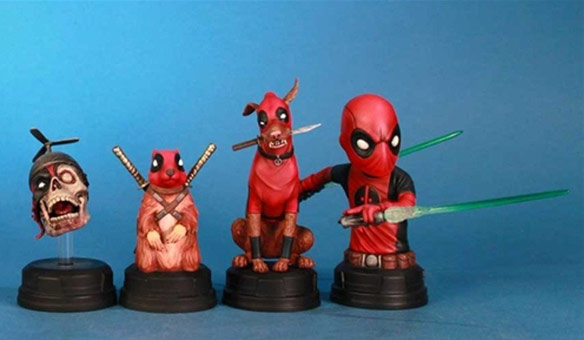 The Deadpool Corps Mini-Bust Boxed Set features the craziest team-up ever assembled in the Marvel Universe, comprised of some of the oddest version of Wade Wilson that exist on alternate Earths.

Cold cast at 1:6 scale in high-quality polystone, this boxed set includes most of the Deadpool Corps, consisting of Headpool, Dogpool, Kidpool, and honorary member, Squirrelpool. Missing from the roster are Deadpool himself and Lady Deadpool, but they are expected to be available in the future.

The limited-edition set, consisting of 630 pieces, is individually hand-painted and numbered, and includes a matching certificate of authenticity. Also included is a weapon accessory pack for the Deadpool Mini-Bust… so the big guy will be armed when he finally shows up.

Fans of the fast-talking Merc with a Mouth can get the Deadpool Corps Mini-Bust Boxed Set for $198.99 at Entertainment Earth and $172.70 at Amazon.com….Also on sale for a limited time at Gentle Giant for $99.

Deadpool loves shattering the Fourth Wall but you don’t have to worry about the Deadpool Corps Premium Art Print doing any damage to your wall. When the Multiverse is in danger, who ya gonna call? Well, you probably want to try to get in touch […]

There’s no need to start a Civil War in order to get your hands on the Captain Marvel Corps Cardigan. This 100% Acrylic Cardigan will have you looking simply marvelous with a color scheme and design inspired by the costume of Marvel Comics’ Captain Marvel, […]

Do you have the willpower to wear the emerald ring of power? Even if the answer is no, you can help defend the universe by wearing the Green Lantern Join The Corps Propaganda T-Shirt and doing your part to increase the ranks of the Green […]

Sometimes not even having absolute control over the power of magnetism is enough, and the X-Men Zombie Magneto Marvel Villains Mini-Bust shows what happens when mutant ability meets undead hunger. The first piece in Gentle Giant’s Marvel Zombie Villains series, this 1:6 scale polystone mini-bust […]