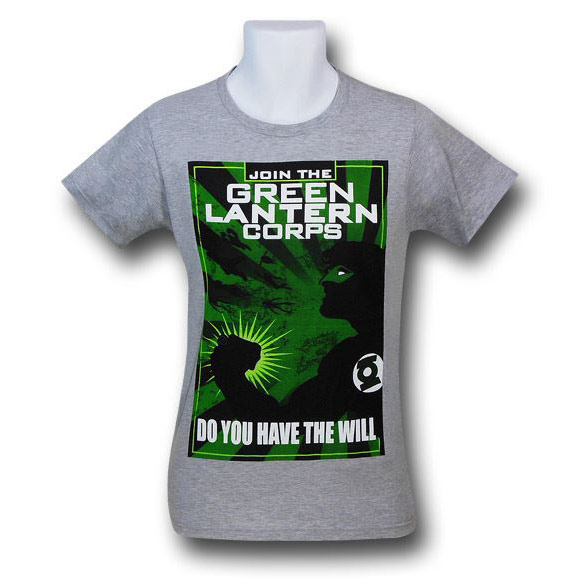 Do you have the willpower to wear the emerald ring of power? Even if the answer is no, you can help defend the universe by wearing the Green Lantern Join The Corps Propaganda T-Shirt and doing your part to increase the ranks of the Green Lantern Corp.

Personally, I’m not sure I’d be thrilled to be a GL. Not only do you have regular bad guys to deal with but you also have to worry about trivial little things like having Hal Jordan being possessed by an evil entity and trying to kill everyone he sees, and little blue Guardians letting their power go to their head and trying to kill everybody they see. Lots of indiscriminate killing to deal with when you wear a power ring.

However, I would still be willing to wear this cool propaganda-style t-shirt because the artwork is amazing… and unlike a power ring, you don’t have to worry about charging up the shirt.

The Green Lantern Join The Corps Propaganda T-Shirt is available for $21.99 at SuperHeroStuff.com.

This Marvel Comics Avengers Propaganda Poster Set is going to make your walls look amazing with some retro Avengers art. This officially licensed set of 5 posters is done by artist Adam Levermore. They measure 18 x 24 inches, and are on 80 lb glossy […]

Send a cool post card to someone you care about. Make it a Star Wars post card. This Star Wars Propaganda 8×10 Post Card Set is pretty awesome. You get a set of 8 postcards: 4 for Rebel sympathizers and 4 for Imperial sympathizers. These […]

There’s no need to start a Civil War in order to get your hands on the Captain Marvel Corps Cardigan. This 100% Acrylic Cardigan will have you looking simply marvelous with a color scheme and design inspired by the costume of Marvel Comics’ Captain Marvel, […]