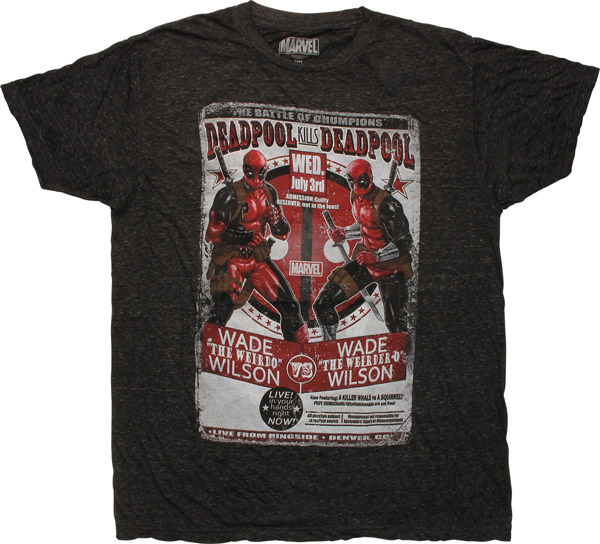 It’s the ultimate battle of the Merc with the Mouth against himself with the Deadpool Kills Deadpool Battle Flyer T-Shirt.

We’ve seen Wade Wilson try to blow himself up on the Deadpool Chimichangerous Tie-Dye T-Shirt but that apparently didn’t work so now he’s taking the battle into the ring.

The sheer heather black 80% cotton / 20% polyester tee features a retro-style boxing poster advertising a unique between Deadpool and Deadpool AKA The Battle of Chumpions.

Personally, as interesting as that battle is, I’m more interested in the fight between the squirrel and the killer whale. 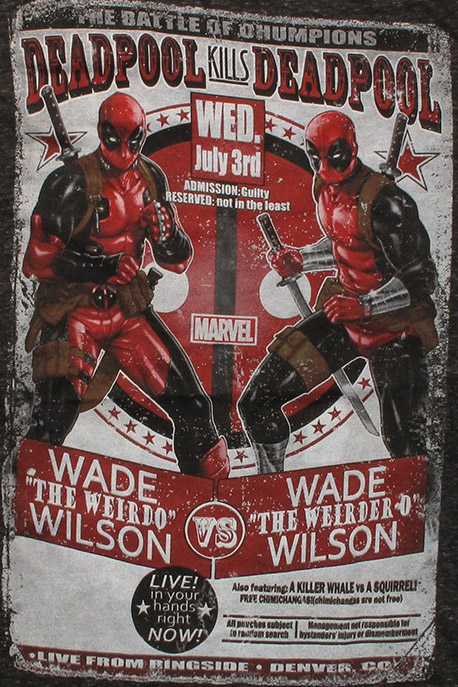 The Deadpool Kills Deadpool Battle Flyer T-Shirt is available for $19.88 – $21.88 at StylinOnline.com.

The idea of flying a remote control helicopter is exciting. The idea of crashing it into the ground and turning it into toothpicks isn’t. The IR Cyber Flyer provides a user-friendly flying experience to help you slip into pilot mode by giving you the chance […]

Starfleet is all about the ladies with the Star Trek Join Starfleet Today Flyer T-Shirt. To boldly go where no man has gone before. That’s what Star Trek is all about, and this eye-catching Starfleet recruitment flyer lives up to those words because there’s not […]

Wade Wilson does what he does best on the Deadpool En Garde Creator Art Print, shattering the fourth wall to take on the person who gives him life. Artist Wiz Yakuza, who brought us the Logan The Final Act Art Print and the Harley Quinn […]

The Aliens are coming and they don’t have little spaceships, but instead use tiny wings! This fun Alien Flyer R/C is a great way to kill some time as you whiz this little guy all over the sky in search of imaginary cows to abduct. […]

With the Deadpool Dead Gorgeous On Arrival Handbag, the Merc with the Mouth becomes the Bag with the Style. If you like red and black and Deadpool, you can’t go wrong with this stylish bag. In addition to Wade Wilson’s eye-catching color combo, the bag […]

Ok, so you think the Puzzle Alarm Clock was too tricky and the Disco Ball Alarm Clock was too…hmm…disco. Maybe the Time Flyer Clock ($22) is the gadget to get your day off to a flying start. Wake up to the roar of the plane’s […]