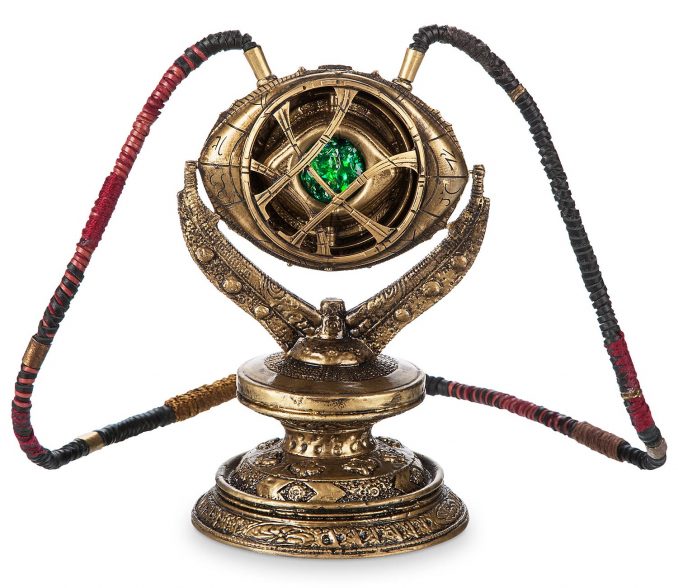 This Doctor Strange Eye of Agamotto – Marvel Masterworks Film Prop Duplicate is so intricately detailed that it feels like it should have real mystical powers. Of course, it can’t actually manipulate time, but this extremely limited edition collectible can be the centerpiece of a fanatic’s Marvel Doctor Strange collection.

Like the Captain America Shield, Iron Man Mark I Helmet, and Groot Puppet, this Eye of Agamotto is part of the Marvel Masterworks Collection and is released as a celebration of the 10th Anniversary of Marvel Studios. It is made upon order by Russell Bobbitt, Head of Props for Marvel Studios, and his team, with a maximum of 50 being produced. It includes a Glass Certificate of Authenticity that includes the specific edition number of the piece.

It is primarily constructed of tooled brass and includes a hand-woven leather lanyard. The coolest part is the light-up Time Stone inside. In fact, the stone used here was developed over the years to achieve the proper glow and is constructed out of several secret materials. Also included is a duplicate of the display stand prop from Avengers: Infinity War.

Get ready to control time – or at least know what time it is – with the Doctor Strange Eye Of Agamotto Pocket Watch. Measuring approximately 2-inches in diameter, this gold-tone pocket watch might not contain the Time stone but it does feature an Eye […]

Your coffee will taste just fine in this Embossed Dr. Strange Mug. Even if it is strange. Dr. Strange. It features the raised Eye of Agamotto on one side and Doctor Strange written on the opposite side. You might even find that your coffee has […]

Benedict Cumberbatch is ready to work some magic as the Doctor Strange Sixth-Scale Figure. Standing 12.20-inches tall and based on Cumberbatch’s portrayal of the Sorcerer Supreme, this sixth-scale figure comes with accessories that would impress even the Ancient One, including mystical accessories like Strange’s colorful […]

This Doctor Strange One:12 Collective Action Figure presents Dr. Stephen Strange. After a tragic automobile accident, he searched the world for a way to heal his badly damaged hands, eventually becoming Doctor Strange. This action figure has a detailed outfit and unique character specific accessories. […]

The Sorcerer Supreme has arrived from the astral plane in the form of the Doctor Strange Movie Pop! Vinyl Figure. Standing approximately 3 3/4-inches tall and based on Benedict Cumberbatch’s portrayal of the character in the upcoming movie, Doctor Strange stands ready to defend reality […]

Rumor is that the surviving Avengers might have to go back to in time to undo the ‘damage’ done by Thanos; so this 8-Bit MCU Doctor Strange T-Shirt is fitting…Nothing beats the classics! This Stephen Strange shirt was designed by Susto and is available in […]