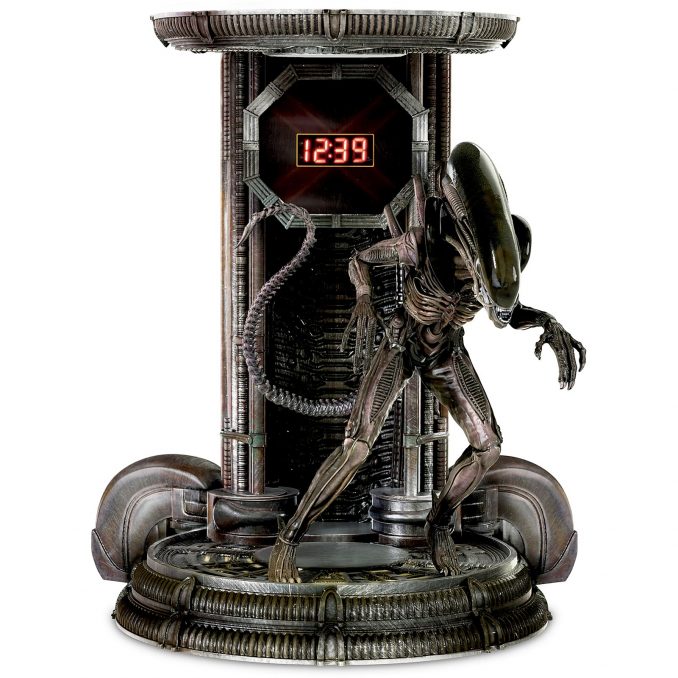 It’s been 40 years since H. R. Giger designed the Xenomorph for the original Alien movie, but his incredible designs are still better than any recent sci-fi or horror film. They don’t look dated at all and are still both horrific and beautiful at the same time. But I don’t have to tell you, just take a look at this Alien Clock With Sculptural Xenomorph Figure pictured above.

Inspired by the classic 1979 film Alien, this clock is meticulously handcrafted with frightening detail. It’s hand-painted so that everything, including the terrifying Xenomorph Figure, looks authentic. The illuminated base, clock, and top, which are inspired by the ominous chambers of the Nostromo, the spaceship where Ripley and the rest of the crew are stalked by the alien, are also superbly designed and executed.

Perhaps the coolest feature is that the clock face glows to mimic the look of the Nostromo’s self-destruct mechanism that Ripley engaged near the end of the movie.

This limited edition piece is hand-numbered and comes with a Certificate of Authenticity.

Available exclusively from The Bradford Exchange, this Alien Clock With Sculptural Xenomorph Figure is priced at $179.99.

Alarm clocks are necessary, but very much annoying. How many times have you been in a deep sleep, dreaming about something you probably want to keep to yourself, when BAM, the alarm starts blaring and la la land is gone. Time to wake up and […]

This Alien: Covenant Xenomorph T-Shirt is the best way to have an Alien on your chest without worrying about all that flesh-tearing and bleeding and dying that usually goes along with it. An extra-terrestrial face of fear looks out from the shadows, drooling hungrily as […]