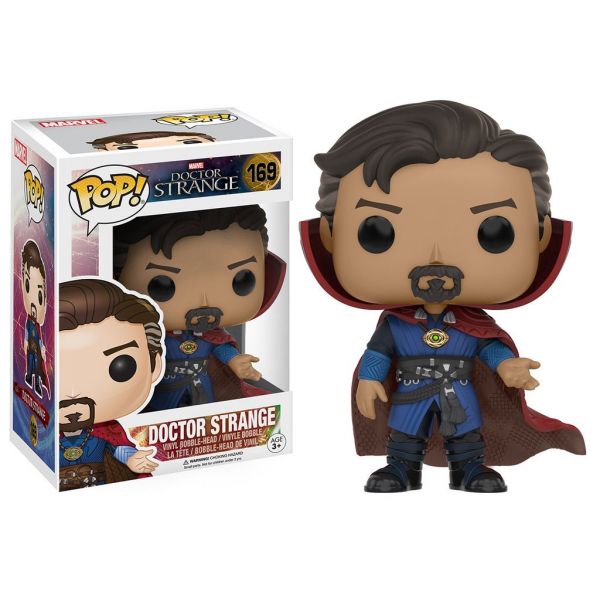 The Sorcerer Supreme has arrived from the astral plane in the form of the Doctor Strange Movie Pop! Vinyl Figure.

Standing approximately 3 3/4-inches tall and based on Benedict Cumberbatch’s portrayal of the character in the upcoming movie, Doctor Strange stands ready to defend reality with his Cloak of Levitation and the mystic Eye of Agamotto… which may or may not turn out to be an Infinity Stone.

If you prefer a Stephen Strange with a few less belts, you might be more interested in the Marvel Classic Doctor Strange Pop! Vinyl Figure.

The Doctor Strange Movie Pop! Vinyl Figure will be available November 2016 but it can be pre-ordered now for $10.99 at Entertainment Earth.

Get ready to control time – or at least know what time it is – with the Doctor Strange Eye Of Agamotto Pocket Watch. Measuring approximately 2-inches in diameter, this gold-tone pocket watch might not contain the Time stone but it does feature an Eye […]

By the Hoary Hosts of Hoggoth and the dread Vipers of Valtorr, the Marvel Classic Doctor Strange Pop! Vinyl Figure is ready to enchant you. The Sorcerer Supreme has been captured… as a cute 3 3/4-inch tall Funko figure. Dressed in his classic blue tunic, […]

Benedict Cumberbatch is ready to work some magic as the Doctor Strange Sixth-Scale Figure. Standing 12.20-inches tall and based on Cumberbatch’s portrayal of the Sorcerer Supreme, this sixth-scale figure comes with accessories that would impress even the Ancient One, including mystical accessories like Strange’s colorful […]

Now that the last Harry Potter movie has been released, current fans will want to go back and enjoy J.K. Rowling’s books again from the beginning and new fans will start to read the books as well.  For those of you who didn’t know, it […]

People won’t need the Light of the All-Seeing Eye of Agamotto to see how supreme your fashion sense is when you’re wearing the Dr. Strange Mythos T-Shirt. By the Hoary Hosts of Hoggoth, Marvel’s Sorcerer Supreme will be conjuring his way onto the big screen […]

This Doctor Strange One:12 Collective Action Figure presents Dr. Stephen Strange. After a tragic automobile accident, he searched the world for a way to heal his badly damaged hands, eventually becoming Doctor Strange. This action figure has a detailed outfit and unique character specific accessories. […]

Doctor Strange casts a colorful spell on your wardrobe with the Sorcerer Supreme T-Shirt. Featuring the likeness of Benedict Cumberbatch as the most powerful sorcerer in the world, Doctor Strange appears as a star-filled portrait summoning the incredible power he possesses. Is he creating this […]

There’s nothing strange about this Marvel Select Doctor Strange Action Figure. It is just awesome. And it belongs in any serious Marvel collection. Marvel’s secret avenger, supernatural defender and sorcerer supreme, Dr. Stephen Strange, is joining the Marvel Select action figure line! And he certainly […]

Your coffee will taste just fine in this Embossed Dr. Strange Mug. Even if it is strange. Dr. Strange. It features the raised Eye of Agamotto on one side and Doctor Strange written on the opposite side. You might even find that your coffee has […]