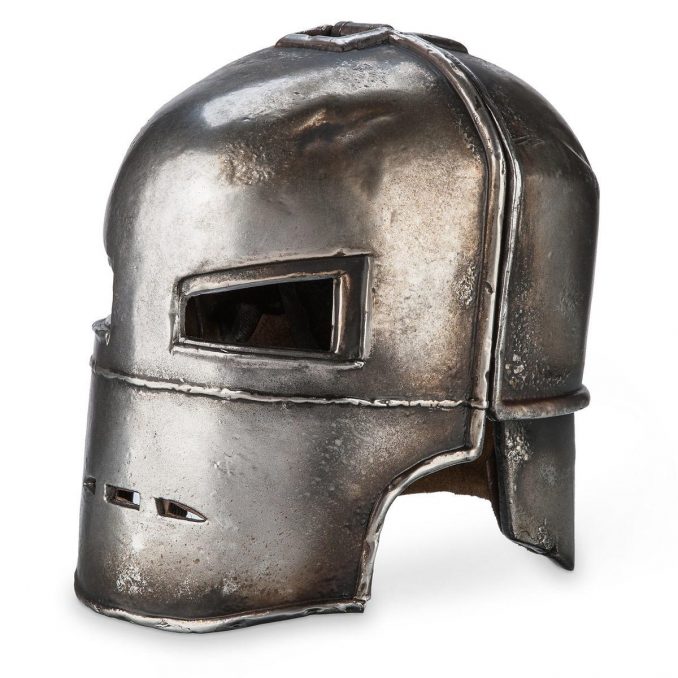 If you’re looking for a centerpiece for your Iron Man collection, look no further than this Iron Man Mark I Helmet – Marvel Masterworks Collection Authentic Film Prop Duplicate. While you often see full-size prop replicas, it is exceedingly rare to see prop duplicates like this. You see, this duplicate is made by Head of Props for Marvel Studios, Russell Bobbitt, and his team, and not just a replica based on the film prop or plans like with mere replicas.

Also, limited editions are often in the hundreds or thousands, but this is limited to a maximum of 50 pieces. Yours won’t be made until you order it, so it can take up to 24 weeks to arrive after you order it. It’s a long wait but is just part of the cost of getting such an authentic item.

Each comes with a Glass Certificate of Authenticity that includes the specific edition number of the piece. It also comes with a display stand, that includes an arc reactor graphic base. In addition, you get a glass medallion, product pamphlet with on-set and development anecdotes from the Head of Props for Marvel Studios, and cleaning cloth. It also comes in a rugged Pelican case, similar to those used by the movie studios to transport and store on-set props like these.

In Iron Man, Tony Stark was tasked with building his original power suit. The first scene in which we see the beginnings of construction shows Tony pounding steel, highlighting the workmanship and skill needed to create the Mark I. The realization of the Mark I is a defining moment of inspiration for Tony as he becomes the hero underneath the suit, Iron Man.

The design for the film’s Iron Man Mark I helmet prop was inspired by the story idea of Tony only having the ability to use salvaged parts from Stark missiles. However, the team recognized that if it was made using solid steel, it would weigh approximately 40 pounds and couldn’t be worn on set for long periods of time. To accommodate the rigorous filming schedule, the helmet was made of resin and lined using real leather. It also featured a comfortable headpiece to allow the actor to have more control over head movements. The team developed the perfect mix of paint finishes and textures to make the helmet still appear metallic.

This Doctor Strange Eye of Agamotto – Marvel Masterworks Film Prop Duplicate is so intricately detailed that it feels like it should have real mystical powers. Of course, it can’t actually manipulate time, but this extremely limited edition collectible can be the centerpiece of a […]

As The Punisher, Frank Castle is a lethal force with basic weapons. With the high-tech War Machine armor, he is extremely powerful and dangerous. Enjoy a bit of that armor yourself with this full-scale Marvel Legends Punisher War Machine Helmet Prop Replica. Highly detailed and […]