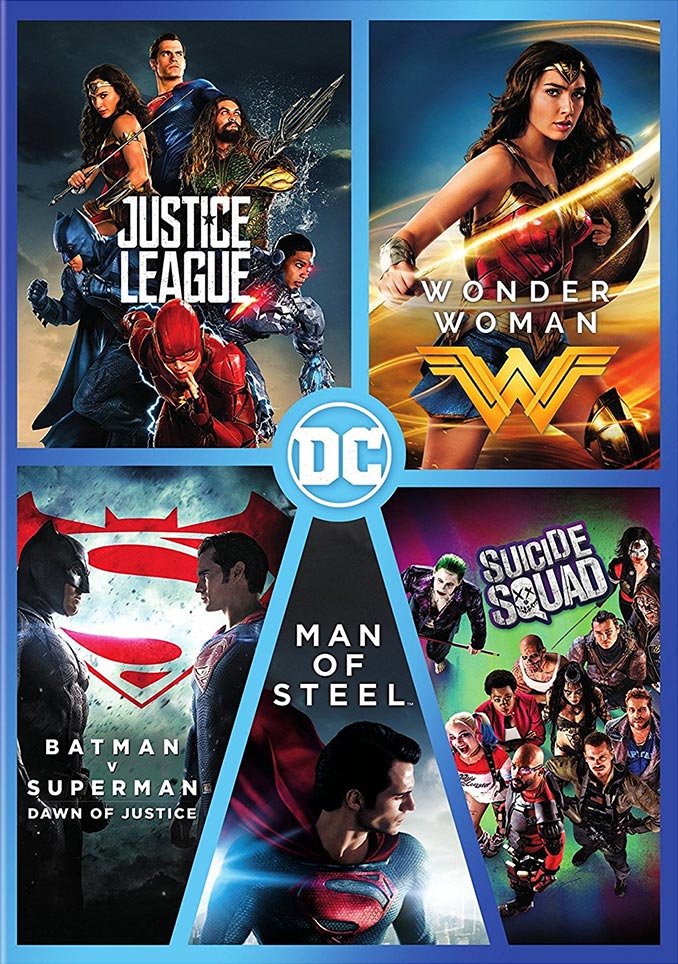 Today Warner Brothers released the DC 5 Film Collection on Blu-ray & DVD. They may not get the accolades and box office that Marvel films earn, but there are many superhero fans that really enjoy the DC movies. This DC 5 Film collection includes their recent blockbusters: Justice League, Wonder Woman, Batman v Superman: Dawn of Justice Ultimate Edition, Man of Steel, and Suicide Squad. 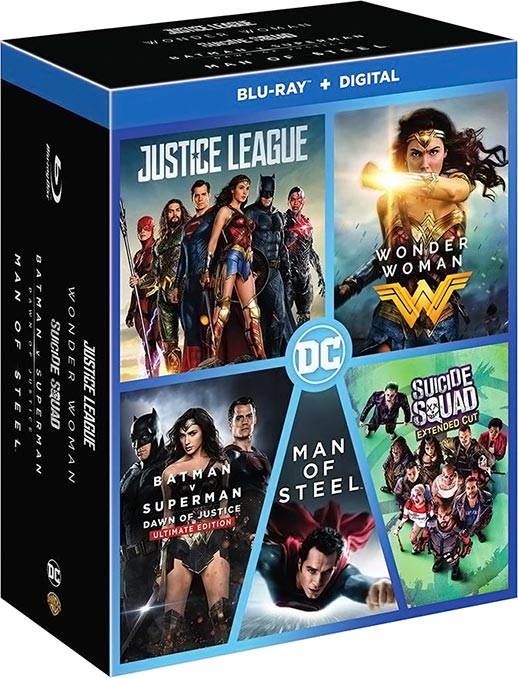 Justice League: Fueled by his restored faith in humanity and inspired by Supermans selfless act, Bruce Wayne (Ben Affleck) enlists the help of his newfound ally, Diana Prince (Gal Gadot), to face an even greater enemy. Together, Batman and Wonder Woman work quickly to find and recruit a team of metahumans to stand against this newly awakened threat. But despite the formation of this unprecedented league of heroes—Batman, Wonder Woman, Aquaman (Jason Momoa), Cyborg (Ray Fisher) and The Flash (Ezra Miller)—it may already be too late to save the planet from an assault of catastrophic proportions.

Wonder Woman: Before she was Wonder Woman (Gal Gadot), she was Diana, princess of the Amazons, trained to be an unconquerable warrior. Raised on a sheltered island paradise, when an American pilot crashes on their shores and tells of a massive conflict raging in the outside world, Diana leaves her home, convinced she can stop the threat. Fighting alongside man in a war to end all wars, Diana will discover her full powers—and her true destiny.

Batman v Superman: Dawn of Justice: From director Zack Snyder comes Batman v Superman: Dawn of Justice, starring Ben Affleck as Batman/Bruce Wayne and Henry Cavill as Superman/Clark Kent in first big-screen pairing of these characters. Fearing the actions of a god-like Super Hero left unchecked, Gotham City’s own formidable, forceful vigilante takes on Metropolis’ most revered, modern-day savior, while the world wrestles with what sort of hero it really needs. And with Batman and Superman at war with one another, a new threat quickly arises, putting mankind in greater danger than its ever known before.

Man of Steel: Superman takes to the skies once more as Henry Cavill dons the mantle of the Man of Steel — wrestling with a past he can’t comprehend and a future he cannot escape. With an all-star cast that includes Diane Lane and Kevin Costner as Clark’s earthbound parents; Oscar winner Russell Crowe as Superman’s Kryptonian father; Amy Adams as Daily Planet reporter Lois Lane; Laurence Fishburne as editor Perry White; and Michael Shannon as Superman’s otherworldly archenemy General Zod, the sky’s the limit for the last son of Krypton. Alive with the directorial stylings of 300’s Zack Snyder and the production team behind Christopher Nolan’s Dark Knight trilogy, Man of Steel offers up an entirely new Superman: alienated, misunderstood, but forever a beacon of hope for all humanity.

Suicide Squad: It feels good to be bad… Assemble a team of the world’s most dangerous, incarcerated Super Villains, provide them with the most powerful arsenal at the government’s disposal, and send them off on a mission to defeat an enigmatic, insuperable entity. U.S. intelligence officer Amanda Waller has determined only a secretly convened group of disparate, despicable individuals with next to nothing to lose will do. However, once they realize they weren’t picked to succeed but chosen for their patent culpability when they inevitably fail, will the Suicide Squad resolve to die trying, or decide it’s every man for himself?

Today Warner Brothers released Justice League Action: Season 1 Part 2 on DVD. This animated television series, which is on Cartoon Network, features the adventures of the Justice League, including Superman, Batman, Wonder Woman, and Green Lantern as they defend earth from supervillains and other […]