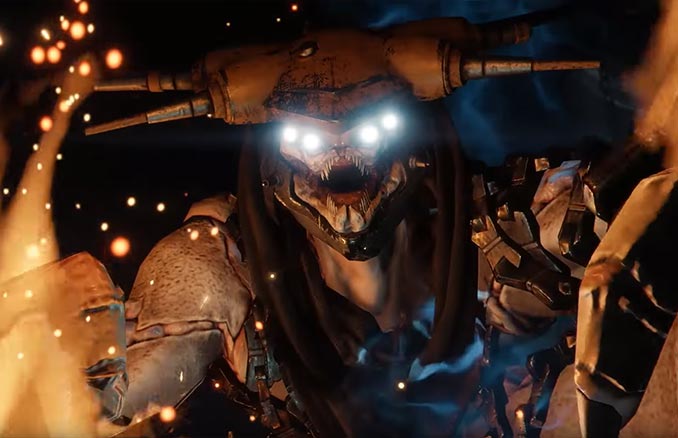 Get an in-depth look at the next expansion in this Destiny 2: Forsaken – Official Reveal Video featuring the Bungie development team.

Following years of strife, what remains of the Reef has fallen to lawlessness. You and Cayde-6 are sent to personally investigate the recent unrest. Upon arrival, you soon discover the most-wanted criminals in the Prison of Elders have organized an escape. Beyond the Vanguard’s authority, you’ll pursue these fugitives deep into the Reef. Explore new regions, awaken new powers, earn powerful weapons, and uncover long lost Awoken secrets. The hunt is on.

Stay warm and look cool this winter with this Destiny Hunter Cape Scarf. This oversized scarf with built-in hood looks just like the classic Hunter design. It is a soft cotton-mix knit fabric that keeps Guardians warm and cozy. There’s nothing better than being warm […]

Role playing aficionados will already be familiar with the d20 die, but combine that with the powers of a magic 8 ball and you get the Magic d20 of Destiny. Just shake it up and let it tell you the future.

This Destiny Action Figure Set is perfect for fans of the hit video game. These highly detailed 7-inch action figures feature Iron Banner – Hunter, Vault of Glass – Titan, and King’s Fall Warlock. All modeled from in-game assets. Each figure has accurate and hyper […]

Doctor Who Destiny of the Daleks Action Figure Set

This Doctor Who Destiny of the Daleks Action Figure Set is all you need to pretend that you are on the Dalek home world of Skaro. You get the fourth Doctor, two Daleks and Davros.

With a new add-on The Sims is finally getting weather, holidays, and seasonal activities. Check out some of the possibilities in The Sims 4 Seasons: Official Reveal Trailer. Much of real life revolves around the weather and holidays, so this will be a huge addition […]