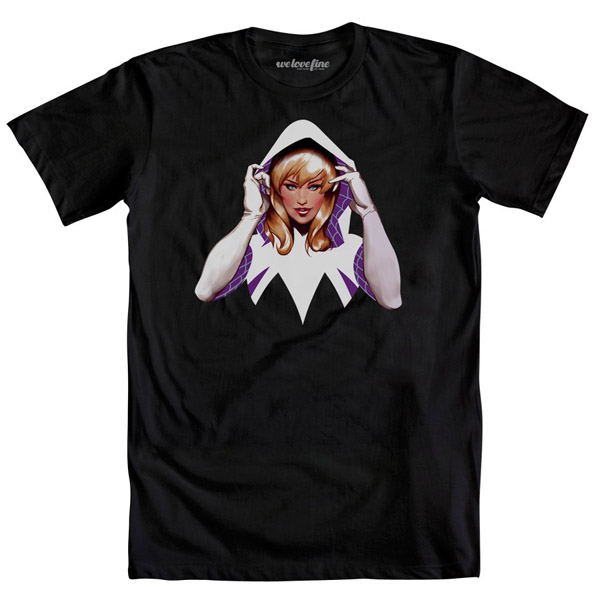 The Spider-Gwen Reveal T-Shirt reveals one of the best things to come out of Marvel’s Spider-Verse series.

If you’re a Spider-Man fan, you’re probably aware of the recent Spider-Verse storyline. It featured more Spidey characters than you can shake a web-shooter at. A few of the characters have been seen before (Spider-Ham, animated Spider-Man from the cartoon series), a few will quickly be forgotten, and a couple became instant hits.

Gwen Stacy of Earth-65 gained an almost-instant fanbase as Spider-Woman… known to fans as Spider-Gwen, and now she has her own comic book series… and t-shirt.

The 100% cotton tee features Gwen as she reveals the face behind the mask. 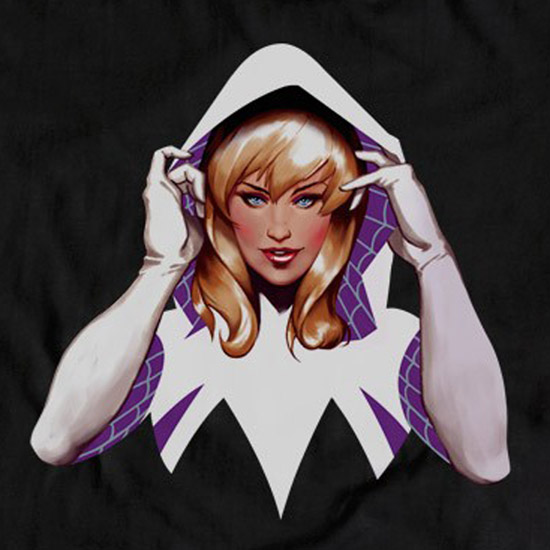 The Spider-Gwen Reveal T-Shirt is available for $25 at WeLoveFine.com.

The time-jumping Spider-Woman takes a break to pose for the Spider Gwen Rock Candy Vinyl Figure. On Earth-65, it was Gwen Stacy instead of Peter Parker who received the fateful bite of a radioactive spider, using her abilities to become the crimefighter known in-universe as […]

When the weather outside gets frightful, you can feel cozy and delightful with the Spider-Gwen Spiderweb Shrug. Sometimes the temperature’s balance is as delicate as a spider on a web; it’s that infuriating time when it’s a little too chilly for short sleeves but not […]

This Marvel Spider-Gwen Cuff Bracelet is a great way to show your love for Spider-Gwen. If Gwen Stacy of Earth-65 is the Spider-Woman of your world, you need this bracelet. It makes a great gift for fans of the alternate Spider hero. Put it on […]